Not surprised that the Pyrrhic lists are laconic, because it is one of those topics from an evidence perspective that our knowledge is much weaker than it initially appears (that is sadly quite common in ancient military studies). I am certainly up for a Thureophori style unit even if they do not specifically carry the thureos itself, but doubt the evidence would specifically confirm or deny such a supposition. They certainly would have been the most versatile, as just logically speaking lance bearing cavalry as well as phalangite style units could be pretty easily countered tactically. One of the things the latest Classical military research has wandered into over the past decade is Greco-Roman fighting was often characterized by smaller engagements involving fortifications over large pitched battles, an overall psychology that would be emulated in Europe during the Renaissance of the 15th and 16th Centuries.

As you mentioned I think one of the main problems with simulating a Pyrrhic force is how much they were or were not standardized. I would personally suggest not much, even among the professional core. Even in Early Roman Imperial times some military historians are really re-thinking how we conceptualize standardization of military equipment in the Classical world (amazing though they were, it still was a pre-industrial society after all), and this goes doubly so for somebody like Pyrrus who commanded a very decentralized multi-cultural force. He is clearly somebody that was more interested in finding and gathering quality warriors to achieve his objectives over being too concerned with what specific types of weapons, shields, etc. they carried. This fits the general post-Alexandrian mindset too, as much to the chagrin of the surviving traditionalists in Greece proper the Diadochi proved time and again they were willing to utilize just about any type of warrior if they were available and could achieve desired objectives. So were the Chaeonians specifically re-equipped with thureos shields as a whole unit? In my opinion probably not; they likely would have fielded a variety of equipment types available at the time that allowed them to accomplish their tactical objectives. If this happened to include thureos shields, then Pyrrhus was likely fine with it.

Hope that helps a little. Frankly the good news about a Pyrrhic army is there is tons of wiggle room in the evidence, so it is a nice army to be creative with. I am not personally an expert in this era (Early Iron Age Neo-Hittite and Assyrian warfare is my #1 specialty), so I have rather prodigious gaps in my specific knowledge of equipment for this time period. Thus additional input from others is always desirable. :grin:

What an interesting reply! I do appreciate the privilege of listening to you & other knowledgeable chaps such as Flambeau & Ironsides.

I think you're completely right about standardised units in any pre-industrial army.

The problem is, as wargamers, we need our units wrapped in neat little boxes in terms of weaponry, equipment & tactics and even numbers. To allow the probable anarchy that existed is impossible to game above skirmish level.

It's not in me to be snarky about Fantasy gaming, but if it was I'd be a complete hypocrite because "historical" gaming has overlaps with this other genre.

I will also confess to not seeing much difference between peltasts, thureophori, Ipicratic infantry etc. Does the shape of a shield change battlefield roles very much at all? There may well be different tactical parameters for all these medium infantry-types but the sources usually don't make that clear. General infantry may well just be general infantry. For example, I know it's exceptional but hoplites in Xenophon's Ten Thousand don't always act like heavy infantry but take on roles seemingly reserved for their lighter brethren.

BTW one day I want to hear your views on Bronze Age chariot tactics. 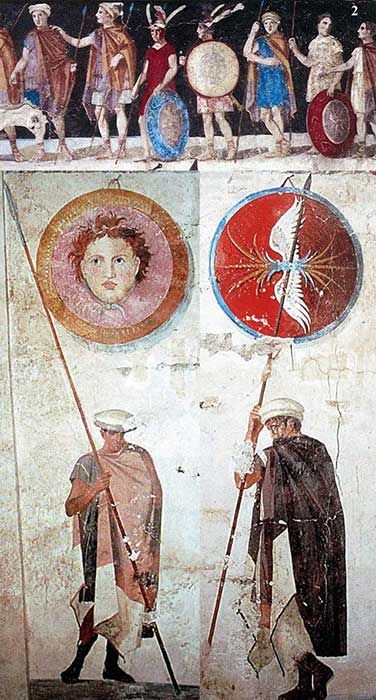