But if enough of us ask pretty please Mr Strelets you might.

being pre-occupied with other eras/areas, we don't have such plans at the moment.
Please, be guided accordingly.

Something very rare for the FFL-fans:

And it is still there:

Some people say that this Fort Lallemande served as a template for the well-known "Fort Sahara" of AIRFIX.

Hm-m.
Airfix's Fort Sahara isn't that far from real forts then.
Until now it was our impression, that it was purely imaginary model.
Regards,

Yes, the people of Airfix have of course made their fort much simpler. Just like the Roman castle of Hadrian's Wall... But there are few Saharan forts that have exactly this area of accommodation.

Strelets
Ever since the 1966 Beau Geste I've looked for an actual image (sketch of earlier forts or photos of more recent) of the Fort Zinderneufs in the various movies. Nope. The best source of FFL forts throughout history I've been fortunate enough to discover is the gracious "Mon Legionnaire" internet site. He's posted links even with satellite images covering the entire of North Africa.

Just some of what I have concluded as an armchair fan of this subject are:

* There's no proof of the Airfix design.
* There are similar designs in the NW of Africa such as Morocco because of the heavy Muslim Temple architectural influence. Tall towers. The Marx Captain Gallant set gets that pretty close.
* Most forts were built as supply chain stops feeding into Africas interior, so, they were built quickly with available resources resulting in fairly low walls and towers or blockhouses.
* They were mostly abandoned after just a few years depending on French commitment since there was never an actual grand strategy for colonialization in the long term, hence, low walls and towers.
* The only observation I can see is there are a number of forts following the square design with two corner blockhouses opposite each other. Each protruding blockhouse can cover two walls each with gunfire.

* There is no proof of the various Fort Zinderneuf designs in any of the BG movies.
* For the Gary Cooper movie of 1939 they do have a photo online of one of the actual FFL Commanders of the day consulting the movie looking down at the model fort with the producer both smiling. But these movie sets built in California and Arizona have since been consumed by the actual sand dunes.

In a nutshell my final conclusion is fiction and romanticism has won out over fact. But, the early BG movies romanticism of adventure and pretty girls did help to recruit new men when the whole Foreign Legion concept nearly vanished.

Yes, there is no proof of the Airfix design of there "Fort Sahara".
But the Fort Allemagne seems to be closest to their design...

It is very interesting, that these old FFL_forts, some of which have been abandoned for 80 years and were left lonely in the desert, are now objects for archaeologists.

To comment on your statement that "the Fort Sahara model isn't that far from real forts", I think yes!

Conceivably, if you put two Fort Saharas together - back to back - with towers opposite each other - and the back walls removed - this could work. The resulting size should be fairly realistic. One Airfix by itself is a little toyish. But four walls, two towers, and the rest is up to you. Those designs were repeated again and again. :palm_tree:

Thank you for bringing up this topic. I think it is so very interesting and I agree with you and enjoy your opinion. If enough of us do a little sleuthing, maybe we'll find some conclusive evidence of the famous Airfix Fort Sahara. I'll bet the original model designer is now himself, "Our friend beneath the sands!"

my focus is on the Prussian army of the Napoleonic wars.

But since STRELETS has released so many different types of FFL sets, I've been looking for a FFL project that I could implement in a small diorama for a long time. Therefore, in the last year I have dealt intensively with the forts and battles of the FFL and SFL in the desert colonies.

After a long search I came across the SFL fort in Bir Moghrein (not to be confused with the later built, much larger Fort Trinquet of the FFL near this place). 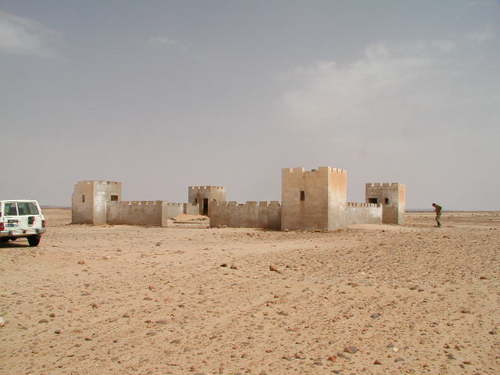 I will probably build this little fort on my own because the 1:72 scale models available on the market are unfortunately "far away" from the real objects of that time.
This little plant also shows what you already mentioned; Due to a lack of building materials, many of these desert forts were fenced houses rather than heavy fortresses. Low walls and often no watchtower at all. Most of the FFL- and SFL-Forts are such little "fenced houses".Fending off an enemy attack there was certainly a "suicide command".

A good example for this small defense buildings (here Spanish FL) and what happens there;

Wonderful, Gerd! I hope you make this fort. It can be very satisfying for you, especially if you have some men to put in it. It can make your imagination run wild with thoughts of what it must have been like for soldiers manning your fort. That's a lot of the fun of building something you know did exist - wonderment. OK, good luck! :camel:

I watched the whole movie - La Bandera 1935. I really enjoyed it (although my Spanish and French is lacking). Just watching you understand the movie plot. The movie has actual forts in it - big ones. So great to see these! And I like the 1930 Spanish Foreign Legion uniforms.

Anyway, I hope you make a fort or diorama and let Strelets post it for you. Who knows, maybe they'll make some of the earlier 1930's Spanish Legion soldiers!

Even if the film "La Bandera" seems a little old-fashioned, it is still something rare. Because there are hardly any films about the uprisings of the Rif-Berbers in the years 1919-26, which later spread to the French territories. While there are many books and films available about the FFL, the Spanish Legion never caught Hollywood's interest. Maybe because the SFL ist founded later (in 1920) and has not such a long history as FFL. Perhaps also because the SFL later fought on the "wrong side" in the Spanish Civil War (from the point of view of the USA).

The Berbers also rarely tried to attack the large forts or garrisons, which were equipped with several machine guns, mortars and often heavy artillery. Therefore, mostly smaller outposts or patrols were attacked ... a typical partisan war. It was not until the end of the war, when the Spaniards evacuated large parts of Morocco, that there were costly attacks against larger Spanish garrisons. In some cases there, the Berbers also executed several hundred Spanish soldiers who had surrendered. General Franco then fought back with great severity in 1925/26, often with airplanes and sometimes even with the use of poison gas bombs. That was a war without mercy ..

Since 1987 the SFL has lost the status of a "Legion", because recruiting strangers was forbidden at the time. Today the SPG regiment is more likely to be seen as a bearer of an old tradition, but only consists of regular Spanish soldiers.

And the tradition is living:

The fastest marching soldiers ever:

Once again, thank you for your thoughts and also the YouTube links. Yes, I do enjoy watching and learning about the SFL. The 1935 movie was a real pleasure for me to watch. It had so many actual historical forts and locations in it. "One picture is worth a 1,000 words" is so true for me. I'm a visual person first, then I go back and read or research.

I find Wikipedia is a great resource for first time research or backup facts. As you know, the FFL was founded around 1834 to clean out France from the undesirables hanging out in pubs and getting in trouble. Sending them to Africa to be sacrificed towards France's colonial aspirations was not a social issue back home. But the years following was a nice surprise to discover these men fought so well together - a kind of strange brotherhood. That's what interests me about them - a legion of strangers - as in the movies.

The SFL seems to have been founded later and more purpose driven. Again such an intereresting history. I'm now just beginning to learn. But any group of men wanting to start over in life, change their names, or just hide out is so fascinating to me. So I will watch each of your YouTube links during this week and enjoy and do a little reading, too. I tell you, those SFL guys look really, really tough! I'd hate to face against them!

So, I'll touch base with you about this next weekend. Oh, yeah, I looked up the BUM SFL 1/72 set (looks like Orion, actually) but it was a limited run and seems to be nowhere to buy. But a great looking set of figures!

First, thank you again for your latest comments and also the additional YouTube links. I enjoyed watching all of them during last week. Man, those guys can really march fast! I also did quite a bit of reading of the history of the SFL and SL and it was really interesting!

BUM Set 5000 1/72 La Legion (I still think an Orion product) were beautifully sculpted, however, I can't find any to buy. Too bad! Maybe Strelets will make some. I do like the uniforms of the 1935 movie and BUM figures, so if you and anyone else requests them to be produced, I'll support it.

And I do hope you make the fort in the photo you included in this thread above. For me, forts are equally important to me as the figures for my collection. So I'll keep an eye out if you go forward with it.

Well, this thread may soon disappear completely so again, I very much enjoyed this discussion. If you guys start a new thread, I'll enjoy seeing it!

OK, have a super weekend and thank you again for opening my eyes to the SFL and SL!