Ignore the job description, imagine these guys holding the farmhouse or Hougamont or in a battered square .

Perhaps Alan. Interesting point there.
Kind of still hints at a failure, if someone has got to ignore its intended use & look for other ways to use it though doesnt it?

Either way, for me, this is a set that has missed its mark, both with the weapons and the design & title of the set in general terms.

Lets agree to disagree & hope the other nations fair much better.

Every set needs a name, but if this set were British line infantry in action it could be arguably more accurate, but the name in this case is a subjective measure and not an absolute one ,just like the bayonets, but they were not always fixed and one of the reasons was "infantrymans hands " or where in the heat of battle a soldier impales himself on his own bayonet while ramming down the round and this was very common,so often fixing bayonets was left as late as possible. From order to having bayonets fixed is less than ten seconds, so there was time usually. Far from being disappointed with this set I am overall very pleased with it and it may even in some small part be from a suggestion I made here not so long ago for just such a set,and it ticks most of what I had in mind at the time. If these sit well side by side with other brands then this set will be very popular indeed, it will provide variety in firing and loading poses rather than ranks of identical poses that are in truth unrealistic in the heat of battle and only suited to the parade ground.

Email
m
Minuteman
79.77.222.208
Re: Firing line- oh my lord!
Alan Buckingham
From order to having bayonets fixed is less than ten seconds, so there was time usually. Far from being disappointed with this set I am overall very pleased with it and it may even in some small part be from a suggestion I made here not so long ago for just such a set,and it ticks most of what I had in mind at the time.
Well, the call for Napoleonic sets in Action, be that firing or attacking or otherwise, is attributable to quite a number of Forum members, Mr B, both those who have written here and those who have remained silent. Posts in recent months demonstrate this.

But it is great to see Strelets responding.

I very much doubt that Pictons's Division at Waterloo fixed bayonets before charging D'Erlon's Columns through the smoke of their volleys. Their bayonets would have been fixed beforehand. You need to remember that many of these troops were veterans of the Peninsular and they would have understood the dangers of being caught unawares without a fixed bayonet. This is not Dad's Army 'Corporal Jones' bayonet humour, it is (or was) for real.

Roger's point which he has made several times before ie: it is easier to remove a 1/72 bayonet than add it, is perfectly reasonable and correct. If Strelets can produce a British Firing Line for the WoSS with troops holding muskets with bayonets, there is no reason not to do so for the Napoleonic era. None at all so far as I can see.
Email
r
Roger W
85.255.234.229
Re: Firing line- oh my lord!

I too would always choose bayonets fixed, but no bayonets does not make it a deal breaker. My suggestion was quite specific, firing and loading poses but all slightly different, whilst not trying to take any credit, this set is very close to that suggestion. Seeing as most truly lethal exchanges of musketry took place at 100 yards or less bayonets were probably fixed at that point, and just as we have said along with the mixed head wear are the two main grumbles, but even putting the guys in soft caps in the spares box the rest of these guys are very good and will be snapped up by just above very nappy fan.

For firing line poses I basically would expect to see at least each of the following...

Taking cartridge, using ramrod, present arms, then of course fire.
The customer can then arrange the figures to show in what stage of drill they are in.

But heres the thing.
Little variations in pose perhaps (a head looking left or right, slight physical differences), but in the main, they would be mostly similar in that unless given the order for independent fire, they would all be operating in unison, milliseconds apart. Sloppyness and tardiness was not tolerated.

It was what made Strelets recent Nap sets so appealing to me and different from the norm. The sets represented individual parts of drill of the day. The firing line would of been no different to well rehearsed drill, maybe moreso than being told to shoulder arms. Lives depended on it.

The Royal Navy was no different.
Completing drills against the clock. Cant fire an effective broadside if gunners are all over the place in their timing. 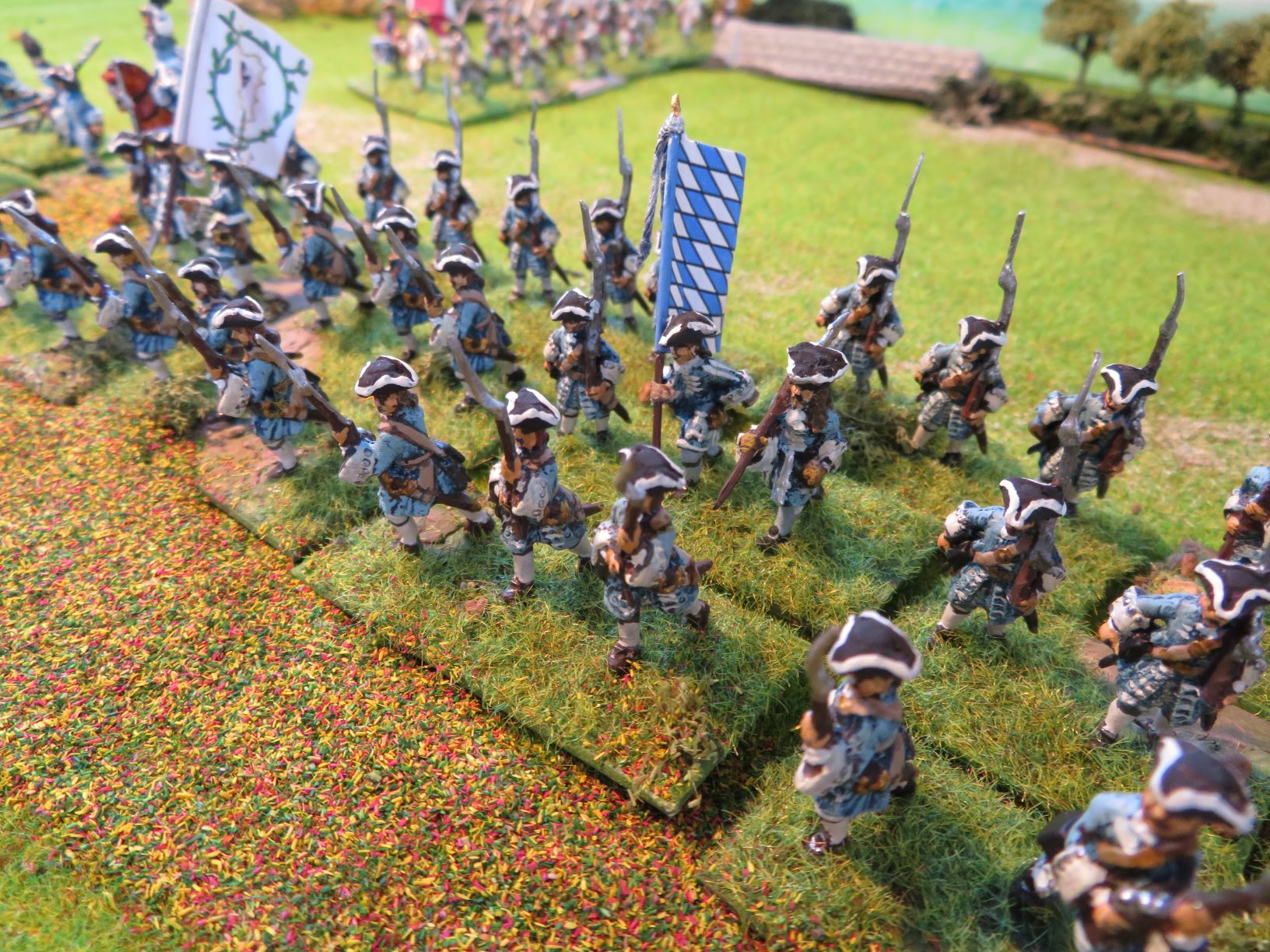 The technique I use to fix bayonets to figures who should have them but do not is: cut bristles of a washing up brush to c. 5mm, attach them to the end of the musket with a small dab of glue, let it dry, strengthen with a dab of PVA, let it dry, then prime and paint. The marching figures in the rear rank of the Bavarian regiment above are WoSS Musketeers in Advance who come without bayonets, but have had them retrofitted using this technique.

That is a great find Steve!! And I remember the Antics model shop in Swindon that Roger refers to, also the Railway Model shop in Old Town where the proprietor had a lot of very old Airfix stuff at very old prices and sold them to me for a bargain.

British Firing Line set: having slept on it, I might buy a box just to see what they look like with fixed bayonets (using the technique above) and painted up. The muskets are suspect, the firing poses not great, the loaders and casualties are good. In a group they might in fact look quite good, And the nightcaps will find their way to heads of my Hanoverian Landwehr, since they are not fit to be seen on the head of a British 1815 infantryman in combat. Neither The Duke or the real General Sir Thomas Picton would have approved of that !

Well I suppose a lot of these fellows might have lost their shakos at Quatre Bras or even stumbling through a thunderstorm towards Waterloo. I'd really like to see some bareheaded folks, but generally I'd vote for separate heads as in HaT's Peninisular Set - just to give people a choice.

Interesting method there Minuteman for bayonets. May try on a few figures in future, but putting bayonets on is just too fiddly for me in the main, i just about manage with swapping heads!! I more prefer to just knuckle down and get painting!

Flambeau i agree, bare heads would of been better and a big yes to spare heads!!!
As for the reasons for losing shakos, I still wouldnt of wanted to face the Sarge!!!

If Strelets release their sets as they have in the past then they will release a Highlander set very soon it will very interesting to see how that pans out.:innocent:

Email
m
Minuteman
79.77.222.137
Re: Firing line- oh my lord! Fix bayonets ...!
Steve H
If Strelets release their sets as they have in the past then they will release a Highlander set very soon it will very interesting to see how that pans out.:innocent:

Yes, it will be interesting. Hopefully a better firing pose/poses than the venerable Airfix Highlander who appears to be trying to avoid the sparks from his flintlock by holding his head well away from the weapon. And hopefully not a soldier bayonetting the ground, a pet hate of mine.

But at least these very old soldiers have (mostly) bayonets.

It's actually a good idea to keep your head up and well away from the sparks and flash from a musket lock! I own three of 'em and have used them at reenactments and even with a modern flash guard fitted they can bite the owner (or the man standing next to him). As there are no back sights on a musket, its rather pointless putting your face down there anyway.....the order was "Present" and not take aim.
Bayonets were also not normally fixed in a firing line!

This argument will never have end.
I have read many accounts of British Line in the Peninsular and Waterloo which point to (no pun intended!) bayonets being fixed ready to receive the enemy. So once enough volleys had been poured into the advancing French, to cause them to falter in a daze and shock, the British would then charge with bayonet. To suddenly pause to fix bayonets would lose all impetus. I suppose it was a Napoleonic form of "shock and awe"!

Also if a battalion had to form square upon threat of cavalry upon them, when seconds count, and they were in a firing line, when exactly do they get the opportunity to fix bayonets???!! The whole battalion operated in unison. They would be drilled exactly how to move from line into square, quickly and efficently. Its a detailed process portrayed in Fawcett & then Dundas' drill manuals among others.
Stopping to fix a bayonet when cavalry is about to chop you down isnt very efficent!!! If bayonets were not already fixed then the square wouldnt of had the same effect...it was ment to provide 4 walls of steel which not only the troopers would of been wary of, but so too taking into account the "flight" nature of a horse.

You obviously have your own beliefs. Thats fair enough.

But the fact is, if the bayonets were moulded on, those who think they should be there have them, those who dont can then just simply trim them off. As it stands, only one of these instances is catered for. As said by many on many ocaissions, its easier to trim a bayonet off than attach one.
The other British sets had bayonets fixed. Who said you had to order arms with a bayonet attached for example?

Maybe these guys could have some North American uses, particularly for 1812-15? Canadian militia units and regulars missing standard equipment seems like something those forces fighting the Americans would have to handle quite often. But yea, not ideal; reminds me of when I used to press the first version Airfix British Paratroops into service as Polish infantry due to lack of other options on hand! :joy:

Again as metioned before, THEY NEED A BAYONET FITTED!!!!!!! also some realy wierd stances, luckily i can cut the foredge cap heads of and replace with correct head, but bayonets are alot harder to do.