Hey guys,
I had announced here, that I had made some conversions based on Strelets figures. Today I want to show you the result. The basis was the Strelets set 228 "Prussian Uhlans". A really nice set, that you can use in many ways and which I was very happy about when it was released.

Horses: :racehorse:
After painting the first box, I was not satisfied with the result. In particular, I didn't like the horses.
Even if one rarely sees horses in such beautiful resting postures, they unfortunately have too short necks and too small heads. After much consideration, I didn't want to use these horses. In my depot there were still 170 Revell horses, which I was able to buy a few years ago cheaply (without a rider) at a model-making fair. These horses and a few old Esci horses formed the new "animal component" of my Strelets-Uhlanen.

Lances: :hammer:
The lances of the Strelets Uhlanen are also well made. The length of the lances fits and also the pennants are well designed. But after the first riders were placed on their horses, I realized that the lances are far too thick. The lance rods must lie well in the hand and have in their original condition only a diameter of 2.8 - 3.0 cm. But the Strelets lances are likely to have a diameter of 5-8 cm in reality. And unfortunately I also did not manage to bend the plastic lances straight. They always remain crooked and return to their crooked position. Therefore, I cut off the lances of the later painted figures and replaced them with thin steel wire. Sticking these lances to the figures was very difficult, but it was worth it. The visual impression is really improved, but you have to treat the riders very carefully. Because the lances have fallen off faster than you can glue them.

[Conversion of the riders:] :scissors:
I cut some of the Uhlanen figures and repositioned their arms, because I also wanted to have an Uhlan "in attack" that holds his lance horizontally. Because there was always an ugly gap on the shoulder, I modeled a blanket roll on the shoulder of this rider with Putty to cover this spot.

Flag-Bearers: :waving_black_flag:
Yes, they are unusual... because the cavalry uses small standards and not such big flags... what if the flag falls over the horses eyes ?
But i like this horsemen with the great flags. If they were part of a "propaganda-unit" which is visiting small towns to enlist volunteers such a great flag is a great symbol. So i painted one in the Lützow colours (black-red-gold), which will by the national flag of the german republic many years later.

I have created two Uhlanen groups and a group of Landwehr cavalry.
Below you can see my images.. 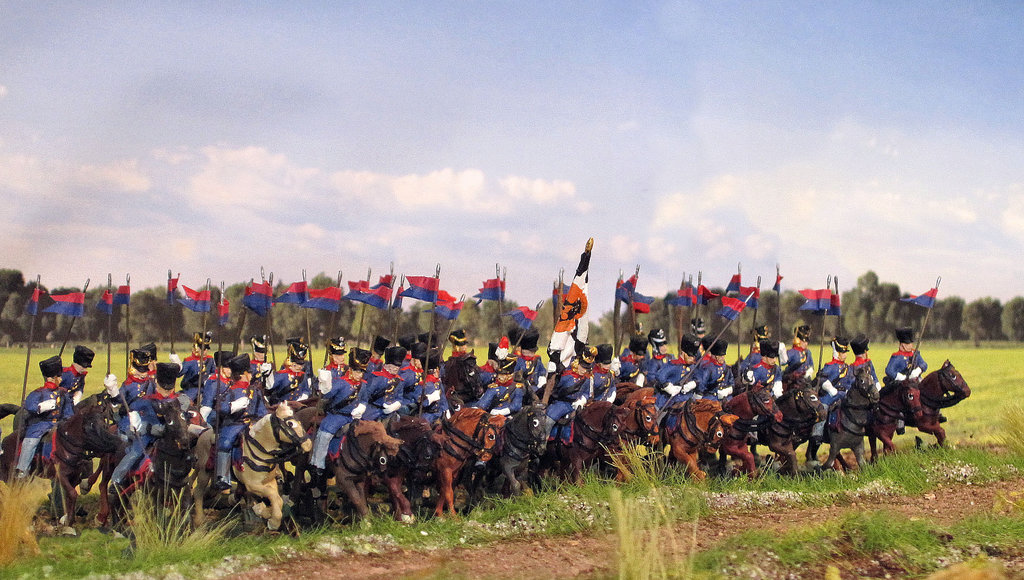 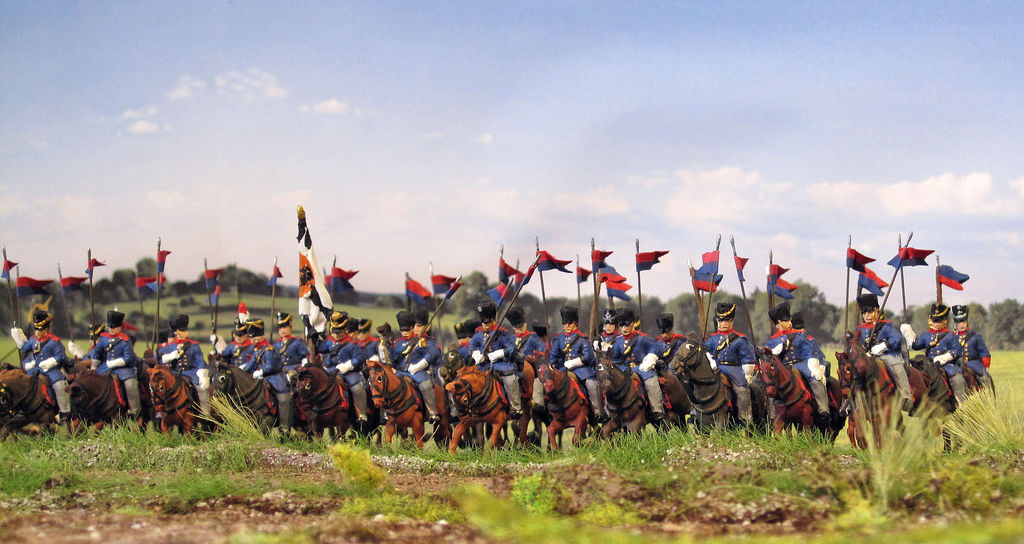 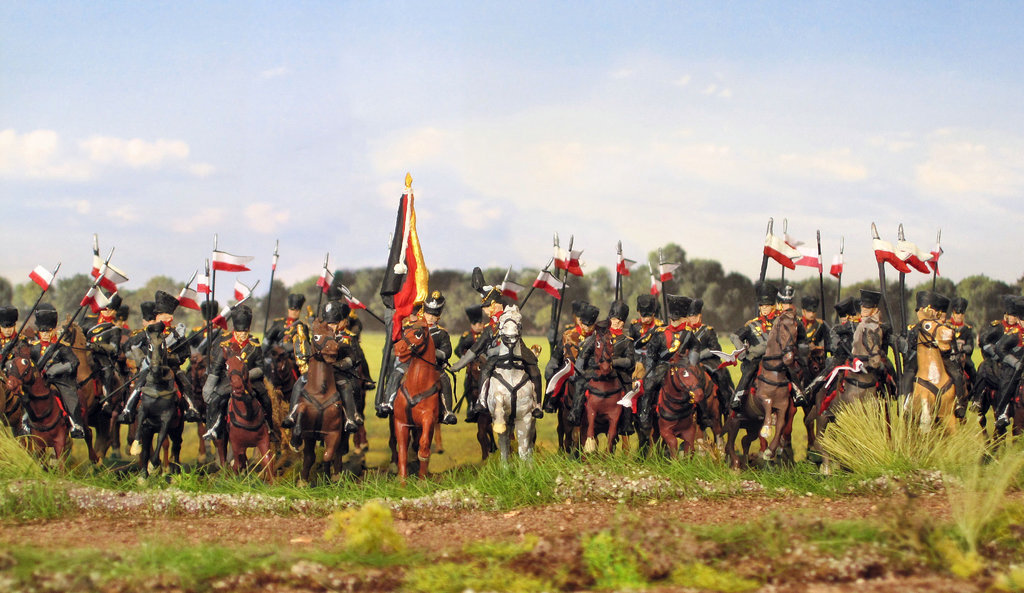 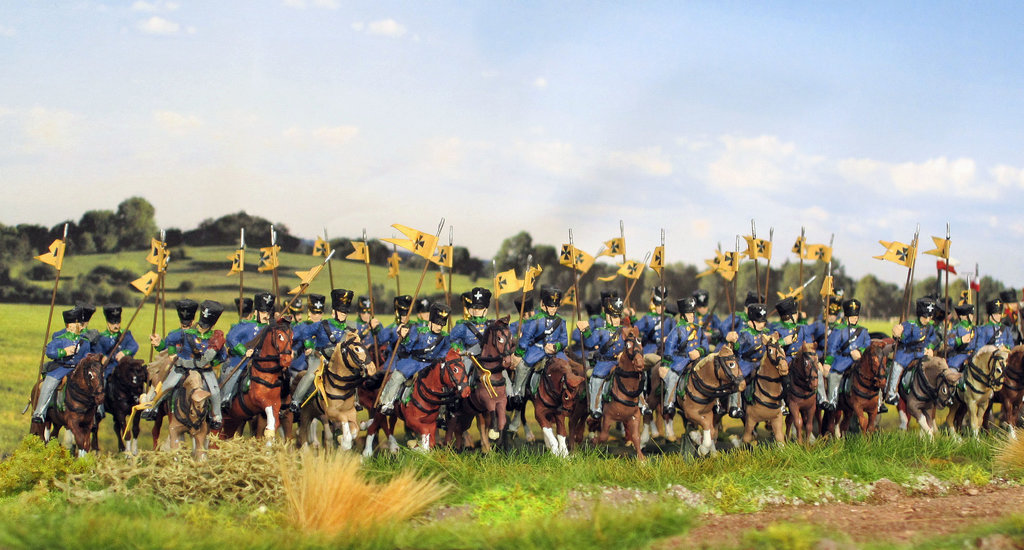 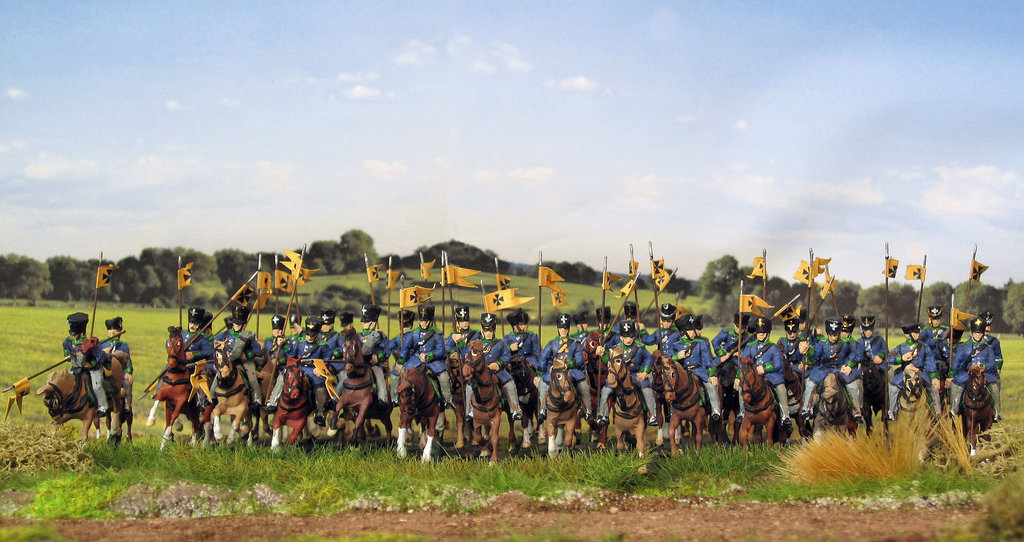 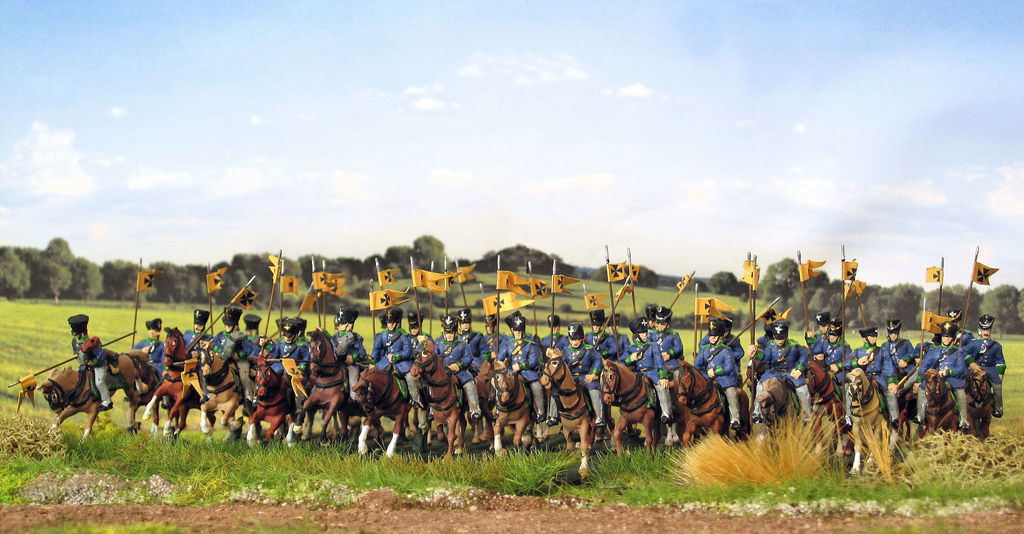 Well done! Fine paint job and a nice setting plus some really good conversions. I admire anyone who manages to paint eyes and mouths in this scale. Very good!

Finally all together...: :heart_eyes: These are fabulous, congratulations!

I especially like the large units with similar but varied figures which brings a lot of 'life' to them.

They are marvellous to study. Thanks for sharing them with us.

These various Uhlan and Landwehr cavalry units look fantastic, well done Gerd! The mass effect of many Uhlans together is very impressive, so some excellent photography here as well.

Thank you also for the useful conversion notes.

Those horses are really showing the whites of their eyes, which in real terms means the horse is scared or tempermental but in general basically unhappy,which probably would be the case when about to enter a scene of smoke, loud noise/explosions and death.

I forgot to ask Gerd what diameter metal wire did you use for the new lances? As what you have used here looks perfect.

I hope that I was able to give you a little joy with the photos of the Uhlanen... in these difficult times...:confused:

It takes some time to rebuild the figures, paint them and create good photos.
But I think that the finished works very enliven this forum.

I am always happy when you like the results.


Roger W:
I use 0.5 mm steel rods with a copper sheath from the railway model range. This is the best material I have ever found for making lances. You have to hit these lances hard before they bend... rather, they fall off the figure.

Hi Gerd.
Ok thanks for the info. I will have a look for those steel rods.

maybe this is an oportunity for you:

Ah perfect! Just put in an order!
Thanks Gerd!

:+1: Hope you show us some wonderful lancers in the next months :wink:

This will take at least two tall cups of coffee to check out all the tasty eye candy!

Thank you for sharing your fine work!

Gerd
May I add my name to the previous host of admirers, what a splendid mounted battle lines. The care and attention you give too them particularly the conversions make me feel a little ashamed,I feel I've done well if I cut off a bit of flash.
I shall further glean the figures for painting ideas as I did with your standing Prussians.
Thank you for sharing

Hello Paul,
Thank you for the praise. I am very pleased that my work has paid off. And because you all create so great things yourself, I particularly appreciate your judgment.

What a most splendid collection of Prussians.

You have worked wonders on these and that, together with the superb photography has resulted in something very special.

Their is a real ‘prescience’ in these pictures, and the pennants look lovely.