Redbox are planning a set of Italian arditi in armour, no idea if its a one off set or the start of a new ww1 range.

If Redbox are moving into ww1 , then perhaps now is the time to email suggestions.

I would like to see some late war Austo Hungarians in helmets and late war Russians in minimal kit, ammo pouches, gas mask case, cap or fur cap and no rolled blankets/ greatcoats, which could complement the Strelets sets.

I agree, we strongly need late war Austro-Hungarians in helmets, more Germans late war, Italians and Romanians too. I am very glad to see arditi produced by RedBox, but I would have preferred them without armor, since the famous "corazze farina" were mostly used by engineers who had to cut the wire with scissors, and not by normal assault troops. 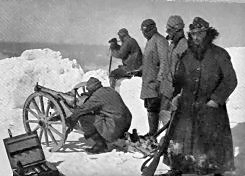 Also extremely pleased about the surprising announcement that RedBox will expand their ever growing range to include WWI now. :+1:

Since RedBox usually produces whole thematic series (rather than standalone sets), I am quite hopeful that they will cover the Italian WWI front as broadly as possible.

Waterloo1815 may likewise still be working on this subject area as well, but it certainly won't hurt to finally have a nice choice of figures for this long neglected theatre.

Would be great if RedBox (possibly accompanied by Strelets?) would tackle the equally neglected Balkans/Macedonian & Eastern Front (Galicia) afterwards! :relaxed:

I agree with the whole list Mr the Great (and agree twice about the mule train).

We Greeks say: Better five now than ten and waiting for (years maybe) !!!

I support the idea of making more 1 ww sets, I would be great to see Bulgarians,Late Russians ,Austrian infantry and more......

Yes Misterred ...Hat should produce 3 box for the elite italian troops...and "Waterloo 1815" has got 3 box of italians: infantry, cavalry, and Alpini.