Menu
Return to Website  > Index Recent Posts
Return to Website  > Index
Recent Posts
Strelets Forum
Start a New Topic
Author
Comment
View Entire Thread
m
Minuteman
79.77.205.164
Re: Plancenoit: 2nd/4th Silesian Landwehr
Roger W
For my part i have some Newline stuff simply because of no alternative in 1/72 plastic, such as my recent purchase of Brunswick artillery. Some SHQ/Kennington stuff also. (My scots greys & other heavy dragoons are Kennington).

In terms of matching up to 1/72 scale, yes id say they are generally too small, however when trying to make squares, there is very little in terms of kneeling figures (in defence/at ready), so am forced to turn to Newline.

Also I have some Newline Hannoverian Landwehr in caps to go towards Col Bests brigade. I think I will get away with these as its a brigade on the Allied far left flank. I believe it will also help give an illusion of distance too.

So with General Pictons use of Newline, i can understand why sometimes. As for the Landwehr, again, if used further out on a diorama, it helps with an illusion of distance to a diorama id say.

But in terms of using Newline etc overall, if there is nothing or very little in 1/72 plastic on a subject you require, there isnt much other choice.
Look at Strelets recent reply about Napoleonic artillery as an example.
Highly unlikely anyone else will make any.

On another note, even plastic manufacturers seem to have trouble sticking within a true 1/72 scale, with sets ranging from 22mm to a ridiculous 26+mm. Waterloo 1815 Prussian general staff? Zvezda Saxon Cuirassiers etc. Not to mention Italeri's 2nd generation of Nap sets.

Those are useful observations on the 20mm metal Napoleonics v. 1/72 plastics, Roger. Thank you.

A while back I did in fact buy some Newline Prussians to fill a hole that (at that time) had no suitable 1/72 figures...I think in fact it was before Strelets and 'the other company' brought out their landwehr sets, strangely enough: I needed marching landwehr and the old Airfix set did not include enough of this pose. However, I was unable to reconcile the size difference with other figures I was using for my Prussian army, so left it at that and bought no more metals.

There are still gaps that I would like to fill, less so with 1813-15 Prussians, but more so perhaps with my 1812 Russians. Unfortunately here again the Russian figures I am using tend to be 'larger' (mainly Zvezda) and a 3-5mm height difference comparing with 20mm metals is just too great a difference.

But there is no doubting the quality of Newline figures, which are very good indeed.
Email

I find New Line work well with the right kind of smaller plastics and I've used them extensively in my squares for kneeling figures: 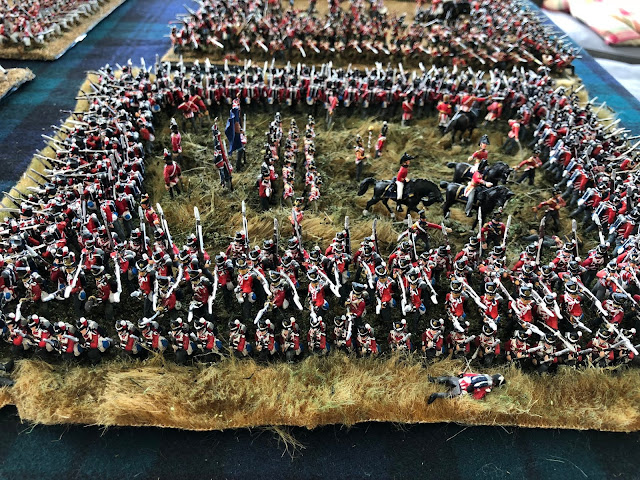 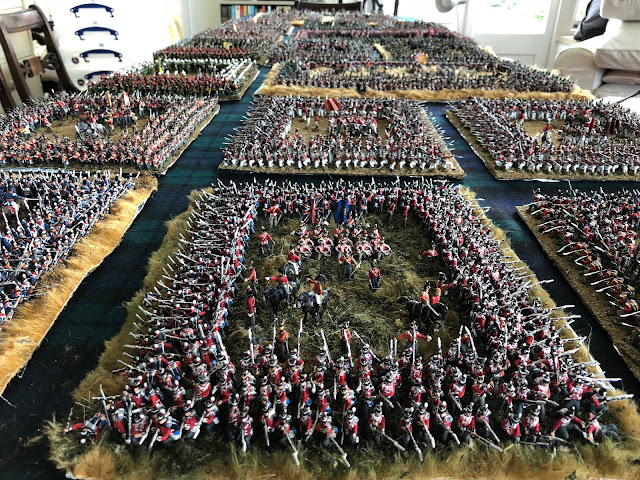 Same here. My 52nd Oxfordshires have a mix of Newline and A Call to Arms kneeling figures and they blend together well. The standing figures ive done for this square im less happy about as the old Hat British light infantry set isnt great, frankly poor compared to todays standards, and the ACTA set only had a standing firing pose. Hats Peninsular Brits are ok, but they still dont have any real "in defense" type poses within it or enough with flank company shoukder rolls on them.
I used some of the extra heads but it still just doesnt "look" or "feel" right. Im sure i will end up redoing/changing the standing figures.

Your squares however look amazing and are truely inspirational.

I would still really like to see more dedicated "in square" sets produced, especially for Waterloo, and preferably by Strelets as their new Napoleonic sculpts are the best out there currently in my opinion.

Once again I am fascinated by your Plancenoit-diorama and the wonderful figures.
This complete Landwehr battailon shows beautifully the great dimensions of such a unit. And one can well imagine the enormous extent of a whole regiment of Landwehr (1.800 men).

This diorama is masterpiece...
And everything I have seen shows real passion for our hobby.

Thank you Gerd, you are a kind man, but credit to the painter who shall remain anonymous1