Absolutely Fantastic, Gerd! It took me 2 cups of coffee to enjoy the beauty of your set-up and the most interesting history you gave us. Thank you, and please keep it up. Everyone here is enjoying the fruits of your labor! :earth_americas:

I hope you enjoyed my contribution... :wink:

For those of you who might be interested in knowing more about the Battle of Malvern Hill in ACW, I've written a brief synopsis of that battle:

In June 1862 George McClellan’s union army was escaping from Virginia, because the raid against confederate capitol Richmond has failled. Dangerously exposed to enemy attacks, over 100,000 men, 280 guns, thousands of wagons, large numbers of wounded, and even a massive herd of beef were attempting to move safely to a new base on the James River.

Confederate General Robert E. Lee was intent on driving them from the Confederate capital, and he could use the largest army he would ever command.

McClellan’s army survived many of the confederate attacks and fought different battles from june 26-29, but was driven back step by step. But also the confederates suffered heavy casualties.

On june 30 the union army reached Malvern Hill, a gently rising ridge 40 meters high and about 2 km long. The terrain in front of the ridge was open and consisted of meadows and fields that stretched almost two kilometers from the ridge. On both sides of the ridge were forests with dense undergrowth, so the ridge could not be flanked.

The federal artillery commander Fitz John Porter saw the importance of the position and occupied it on June 30. He arrayed his guns along the ridge, and the gentle incline created a perfect field of fire for his guns. His 10 pounder rifled Parrotts, 32 pounder howitzers, and 12-pounder Napoleon smoothbores swept all of the cleared area on the hill, behind them the 20 pounder Parrots in second line.
The fire of this massed artillery guns could even reach the woods at the horizont, so the federal artillery completely dominated the landscape and the Confederate attackers would immediately come under massive artillery fire should they emerge from the woods and form columns. Porter could use his great artillery reserve, so the batteries that had run out of ammunition could easily replaced.
This allows him to post always 40-50 guns on the ridge firing at the enemy.

After General Lee and his staff had made a picture of the enemy position by a reconnaissance ride General D.H. Hill commented, “If General McClellan is there in strength, we had better leave him alone.”

But Lee could not allow his adversary the opportunity to re-form and strike again.
A frontal attack against those guns did not appear promising, so he and General Longstreet try to find a way to eleminate the federal artillery on the ridge. There were two small rises left and right in front of the confederate line. If they could get enough guns in this positions, the Confederates could catch Porters artillery in a crossfire and drive off his guns from the ridge, clearing the way for an infantry attack.

But the confederate guns generally had less range than those of the federal artillery on the ridge. Many were obsolete 6-pounders and howitzers. And most of the guns were dispersed among the infantry units. So it was extremely difficult to find these guns in the widely dispersed marching columns, send them the appropriate orders, and then quickly assemble them at the appropriate locations.
And so the planned infantry attack up the ridge was doomed to failure, because it was not possible to assemble enough guns. In addition, the few guns that reached their positions were directly destroyed by the massive enemy artillery fire.

And so the catastrophe began:
As General Armistead's soldiers charged enemy outposts, they let out their battle cry. This was intercepted by other units as a general attack signal, so more and more infantry units formed up and marched up the ridge.
Without cover, without own artillery support and unaware of the enemy artillery massed up there.... !!!

Lee and his General Staff lost control of his forces... and the massacre at Malvern Hill began...

The right flank of the Confederates was also fired upon by Union ships with their heavy naval artillery, which were about 3 km away on the James River and accompanied the retreat.

General Hill had already criticized Lee's aggressive actions during the war.
He also criticized Longstreet's and Jackson's operations, which were undoubtedly ingenious from an operational point of view, because from his point of view they required extreme marching performance from the soldiers, resulted in high losses of personnel and material and undermined morale in the long term.

The later statement by General D. H. Hill about the events on Malvern Hill ("It wasn't a war, it was murder.") should therefore not be seen primarily as an accusation against the enemy, but as a criticism of Lee's attack against such a strong enemy Position without systematic preparation and a clear picture of the situation.


To finish this story, i show one of my older pictures again....because it fits so well. 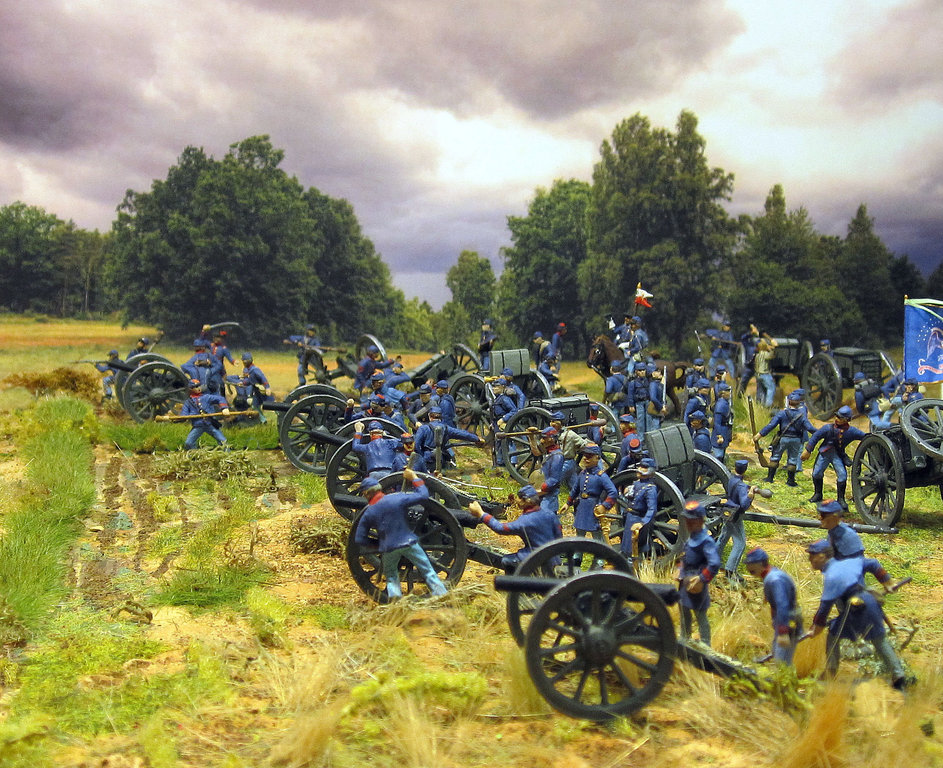