I blog every day, this is my latest publication. It's a science fiction story set in the 1950s in the USA in a small town with M47 tanks and M59 APCs defending against unknown robot invaders. This particular posting is about half way through the story. I took the photos outside in the snow, so that's real snow in the photos. Figures from Imex and Dark Alliance, mostly.

On my workbench I am doing head swaps for various 1890 to 1940 US Army troops and organizing the figures. They include Airfix, Emhar, and HaT WWI Americans and British mostly, but at least a few figures from nearly everyone including Strelets, Odemars / Ykreol, Dark Alliance, and many others. The US and UK uniforms from the period look very similar and many of the weapons are identical. I am also using a lot of Boer War from Strelets figures and weapons and some ACW Parrott Rifles. ACW smooth bore artillery was in service from the ACW for decades and in storage for decades after that. I am also using the Strelets Creusot Long Tom 155mm Gun with Boer Crew as it is nearly identical to the US made M1890 5 inch gun. The crew works well as militia, which I am using for small guns. The Parrott Rifle Union Army crews are working the Creusot guns.

I’ve actually been following your work on this project on your blog Mike. I really like the concept. Typically we think of an alien invasion verse modern human technology, but I find your take on it much more interesting. Keep it up!

Although I'm rather swept up by work at the moment, there's, as usual, a variety of projects on the painting table.

1. Forest bases. I'm working on 4 stands of trees. These each have several circular depressions into which you can put 2c and 1c coins. The trees will come from China in a few weeks & be glued to the coins.
When skirmishers need to march through the wood, individual trees can be temporarily removed.

3. Late Romans. I'm finishing off the movement tray for a unit of dismounted Huns.

4. Linear B Pyrrhic Phalangites. A certain amount of effort is needed to clean the figures but the effort is worth it.

In terms of Strelets figures, the priority project this week is preparing 4 companies of the Gardes du Corps of the Maison du Roi (circa 1700-1715 era) for painting. Obviously the new set (240) just out from Strelets is the main basis for this.

Incidentally, while Strelets are busy with other things (including staying as safe as reasonably possible) the Contributions page has 'frozen'. I believe the web-designer has left to pursue other duties in defence of his homeland.

In view of this, I am wondering whether Strelets would accept posting pictures directly onto this Forum? I know that this does happen from time to time anyway, and it would be good to be able to see each other's work until such time as Contributions is up and running again..

Very slowly painting some Strelets, Redbox and Mars minis I started way back but never really finished as well as the last of my CoolMiniOrNot Game of Thrones 35mm something. But mostly doing research for the Kronoskaf WoSS site at the moment.

g
GarrisonClay
108.238.94.146
Re: Current Projects...and Contributions
minuteman
In terms of Strelets figures, the priority project this week is preparing 4 companies of the Gardes du Corps of the Maison du Roi (circa 1700-1715 era) for painting. Obviously the new set (240) just out from Strelets is the main basis for this.

Incidentally, while Strelets are busy with other things (including staying as safe as reasonably possible) the Contributions page has 'frozen'. I believe the web-designer has left to pursue other duties in defence of his homeland.

In view of this, I am wondering whether Strelets would accept posting pictures directly onto this Forum? I know that this does happen from time to time anyway, and it would be good to be able to see each other's work until such time as Contributions is up and running again..
Dear Minuteman,

Yes, I totally agree. I was thinking the same thing - post your Strelets projects here on this forum as a way of giving the Strelets Team something new and enjoyable to look at and relax their minds a little as a way to give back to them for remembering us every Friday. It really is important to me to know they remember us, and they know we remember them!

Godspeed to everyone - GC
v
Valentin
5.165.47.111
Re: Current Projects...and Contributions
minuteman
In terms of Strelets figures, the priority project this week is preparing 4 companies of the Gardes du Corps of the Maison du Roi (circa 1700-1715 era) for painting. Obviously the new set (240) just out from Strelets is the main basis for this.

Incidentally, while Strelets are busy with other things (including staying as safe as reasonably possible) the Contributions page has \'frozen\'. I believe the web-designer has left to pursue other duties in defence of his homeland.

In view of this, I am wondering whether Strelets would accept posting pictures directly onto this Forum? I know that this does happen from time to time anyway, and it would be good to be able to see each other\'s work until such time as Contributions is up and running again..
Great choice! The figurines are wonderful, it is a pleasure to work with them.
https://vvevit.blogspot.com/2021/12/ 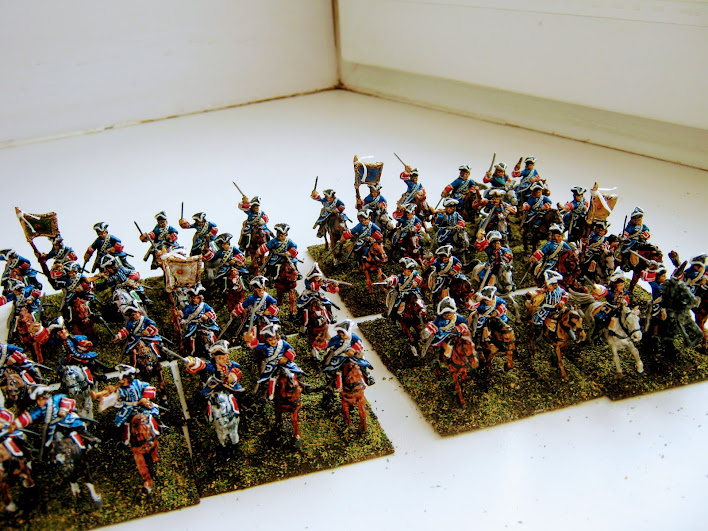 Thank you, Valentin for your posting pictures and the link!

Another reason to enjoy checking the awesome Strelets Forum. Such wonderful figurines and painting skills.

And remember, Strelets Team, I don't paint my figurines, so I especially enjoy seeing your fine new images to add to my collection.

Currently painting up some 3D print Napoleonic Belgian Carabiniers. Made by Taylored Miniatures on ebay.
Done the horses, working on the troopers now.....well trying to anyway! Painting in a heatwave is not ideal!

Just finished some more WSS British cavalry for Blenheim. I’ve now started some Garde Du Corps cavalry-although I’m not as ambitious as Mark and will only do one company of them!

Asher, do you post pics of your WSS units anywhere? I like to have a peak at other people’s WSS figures so I can steal ideas and inspiration!

Hopefully Bennos forum will start to get busier again soon, as it’s the perfect place to share contributions and get feedback and hints and tips. But I’d also be delighted to see people’s contributions on here as well! I’d even accept looking at people’s Nap figures!!!

Just finishing off some EWM 1914 French Cuirassiers (which look scandalisely similar to Napoleonic), Shermans for the Pacific, and a rather intimidating 200 Napoleonic French Horse Grenadiers for the Waterloo Uncovered project.

I unfortunately have not posted pics of my work anywhere but I’ve thought about doing it for awhile now. With that being said I must confess Rich that I’ve used your work on Benno’s forum almost exclusively as my painting inspiration for the WSS. Your style of painting (in my opinion) is outstanding as is your dedication to historical accuracy. So I’ve done my best to mimic your work, although I must confess the quality falls short a touch!

I printed out a copy or War Office UK Battle of Blenheim uniform guides and currently have 25 to 30 or more men and horse painted for the units shown except for upcoming cuirassiers and dutch infantry...lots of work but it made the pandemic fly by...all mostly Strelets except for some Zvezda Russian and Swedish cavalry and artillery and a few infantry. so I have six large multi drawer storage cases full to the brim.....waiting for someone to come up with some 3d printed buildings in 1/71 of Blenheim....I visited the battlefield in the mid 80's on a beautiful spring day while I was stationed in Goppingen...I never imagined that I would one day own both armies....that was the year that ESCI first came out with figures for Waterloo....we have really progressed beyond my wildest dreams.. I am now collecting 1/72 3d printed buildings of Quatre Bras battlefield... have Quatre Bras ferme, La Bergerie and La Baraque...saving up for Gemioncourt farm....plenty of buildings out there now for all periods....it is amazing. I'm 69 and caring for my 97 and 95 year old parents and my hobby brings me great peace. Now lets get those Cuirassiers in the pipeline...my Garde Du Corps and English Dragoons are due to arrive Monday!

Where can these 1/72 scale buildings be purchased John? I’d be incredibly interested in something like that. It’s a wonder what 3D printing has done for the hobby

There seems to be a lot of 3D print buildings on ebay. All sorts of scales. I too have seen the Quatre Bras buildings. There are also some Waterloo ones kicking about. Even the less well known buildings such as Mont St.Jean farm & "Le Caillou"-Napoleon's HQ on the morning of the battle.

But other theatres of the Napoleonic war and of course other era's as a whole are also represented. WW2 especially.

OTP Terrain out of Australia seems to have the best selection and Warfayre in England...if you go on EBAY and type in 20mm or 1/72 wargames buildings the sellers will come up...Brian at Warfayre will make anything he has to your desired scale and is rather quick returning item to you...OTP takes 4 to 10 weeks and I have two large orders i am awaiting from them...they even have buildings for battle of Liepzieg and Highland 3d prints has a great selection....printers licensed by Jens Najewitz are popping up all the time....there is more stuff available than you can ever have room for. Good luck!

Thank you for the tips John! I’ll have to give them all a look.

Thanks for the tip, Dutch and Belgian Carabineers on their way. Trip Van Zoutelande's Brigade will finally be realised. Of course I would have preferred to remain loyal to Strelets :innocent:
Now, about those Prussian Artillery Train ......

I finished painting a STRELETS set a few weeks ago and created some pictures for the contribution page. I sent these pictures to STRELETS, like the years before... But they never replied and didn't publish the pictures either. So I think they have more important things to do these days (including protecting their lives and defending their country). That's why I tried to show a few new projects in the forum through my photo posts.

I'm in the process of painting some cavalrymen from the American Civil War. I need them to create another scene.

I also have to finish painting some Napoleonic cavalrymen.

But yesterday we had 39.5 degrees here.....so i don't feel like painting figures.. :sweat_smile: :sweat:

Basing up my Napoleonic Wurttemberg Division....just a few command bases to finish off.

Currently painting some WWII French, some HYW to be able to field a couple of retinues for Lion Rampant - sadly none of these Strelets. Have an ongoing project of painting medieval civilians many of which are Strelets which I do as and when.

I’ve just temporarily stepped out of 1/72 scale to tackle Perry miniatures allied cavalry.
Unhappily my rubbish painting skills are even more visible on the larger figures but I’m quiet and content and out of the blazing heat.☀️😎

In these hot weeks I can not paint small things and then I try to make a career armed and tanks one after the other ... KV2, Turan ll, SPA Viberti, Lorraine and Laffly, Gaz truck and many more...