I finished a project last week that had been on my schedule for a long time.

I wanted to show a Prussian Landwehr unit forming a defense-square.

That sounds pretty simple at first. But I then found that many of the poses needed for this are not in the available sets.
And with sets that could be used, the bayonets on the muskets are unfortunately missing (AIRFIX).

So again I had to design, rebuild and adjust to get all the characters I needed.

And here is the result of my work:

Since a square was only formed when a cavalry attack was imminent, a little French cavalry must of course also be added.

Otherwise it's not complete...

Before you ask: The Prussian army did not use a kneeling line in the square. This was abolished in the new military regulations of 1813. There were two standing lines that took turns firing their muskets while the third line did the musket loading. This allowed for a very rapid rate of fire to be achieved.

Try loading a long musket while kneeling.....it takes much, much longer than standing.. :wink: 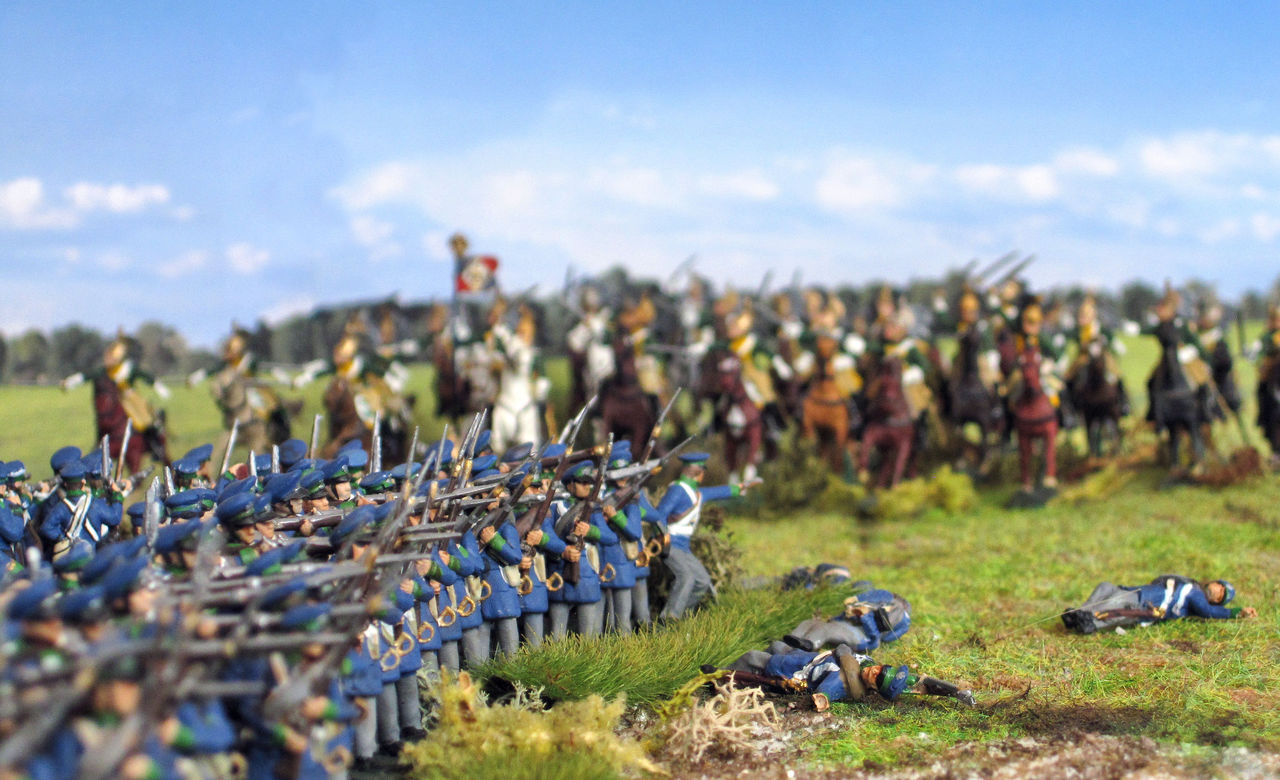 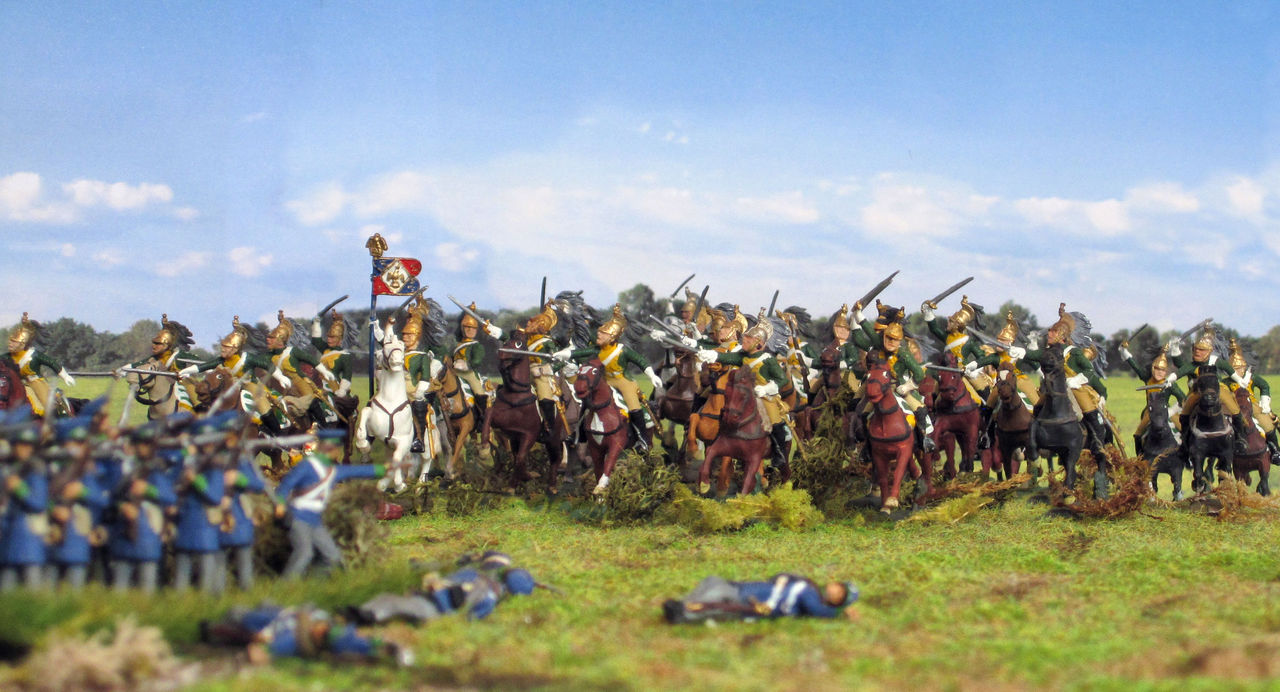 And I agree, from 1813 the Prussians did not kneel when in square.

I also agree that there are so few poses out there that are suitable for defensive square building. Strelets have started to address that problem, heres hoping they get the opportunity to continue doing so.

Bravo, Gerd! Keep posting your Strelets Armies! So much enjoyable to look at time and again.

Beautiful work Gerd. I appreciate the research that goes into your work to ensure its historical accuracy. And I’ve always found the Landwehr’s uniform to be especially pleasing to look at, so this is a treat to say the least! Well done

Gerd, wonderful work, and a huge amount of time and effort on your part, I always appreciate both the eye candy and the time put in to produce it.

Sure looks great. The only issue I have is, that on a number of websites it's stated that

"The Prussians formed their battalions (4 companies each) rather in closed columns than hollow squares. Their regulations issued in 1812 (Exercir Reglement fur die Infanterie) eliminated the hollow square in favour of a dense column formed from the Angriffscolonne." https://www.napolun.com/mirror/napoleonistyka.atspace.com/infantry_tactics_4.htm#infantrycombatsquares

"The Prussians switched from the hollow to solid square in 1809. In the Instruction zum Exerciren der Infanterie issued in that year was stated: "All the manners which have been formerly in use to form the square are abolished. Instead of them, at any time, a massed battalion is used."
The regulations issued in 1812, Exercir Reglement fur die Infanterie, eliminated the hollow square alltogether in favour of a dense column formed from the attack column ..."
http://napoleonistyka.atspace.com/infantry_tactics_4.htm#_infantry_squares_against_cavalry

Perhaps you have different informations?

I'm late to view and to comment on these lovely Westphalians in square, set off beautifully by the Italeri French dragoons (one of my all-time favourite sets of figures).

Marvellous, marvellous painting and arrangement of this diorama Gerd.

Thanks for the visual delight.

Gerd
The Prussians look great and it's so good to see a contribution on the website again.

I thank you all for your nice comments.

It's always nice when I can give you a little pleasure in our hobby with my work an my pictures.

And I also think it's great when we can exchange technical information about the formations and uniforms.

Your are absolutely right..

After the 1812 regulations, the squares of the Prussian army became really very compact, leaving very little empty space inside. In practice, however, the closed square (less space inside of the square) was not always formed.
In particular, when enemy artillery was nearby, its possible to build the open square. Because otherwise the closed square would have become a death trap as soon as the first cannonballs flew through the rows.

But it was also decisive in which initial formation the battalion was standing when the square was formed. If the battalion was already set up in a marching column and moving forward, then the attacking column could quickly be formed and the closed square formed from it.

However, once the battalion had broken up into a line formation, it first had to be regrouped into the attacking column. Therefore, when cavalry suddenly appeared in need, a makeshift (inside) open square was often only formed by swinging back the wings, which then did not always look as neat and tidy as my square here in the pictures.

We tried out the different methods of forming a square during excercier exercises in reenactment. And the stopwatch clearly showed that it takes far too long to form a closed square from the line formation. You can train it as many times as you want, but it's just one more formation that you have to build first (Colonne), before you can form the square.

I actually intended to depict a closed square.

But there was a central problem:

In the closed square many soldiers simply stood "rifle at foot"...
And I don't have enough figures like that (yet). :confused:

So I implemented plan B... :stuck_out_tongue_winking_eye:

But you know.....sometimes you will see a closed sqaure here...

you're absolutely right about the disadvantage of the closed square being an excellent artillery target, I presume the closed square was more a sort of convenience - it required less drill and experience to form (so much easier for militia and Landwehr and raw troops) and it was more mobile. And artillery was not always brought up together with the cavalry - the French could have been much more efficient at Waterloo in this respect. But I often think that the omnipresent picture of the British squares at Waterloo - immortilized by so many tales, paintings and of course the movie - has almost completely overshadowed the fact that not all nations copied it or used it in this way. So seeing no kneeling Landwehr troops is fine! :relaxed:

And, yes, we never can have enough figures or money to buy them now, can we? Not to mention spare time to paint them ... :grinning:

Yes, you are absolutely right about that.

In particular, the lack of time is often the problem.

But I will use the winter months to create the figures for a closed square. And then I will take my camera and document the result of my plan A square..:wink:

But I hope that you still liked my Plan B-Project.:smiley:

One thing that puzzles me though. From my reading I always understood it was the wall of bayonets in an infantry square (as supplied by the kneeling rank) that was the real discouragement for horses to charge? I thought that hedge of bayonets was really intimidating for them?

I just wonder how a square without a rank of bayonets glinting in the sun would have provided the same fear factor? I appreciate the standing ranks would still have had fixed bayonets, but they don’t seem to present the same intimidation factor as a line of steel all poking up from the ground?

I guess it must still have worked for the Prussian’s to have adopted it!

I don't think it was the bayonets that kept the horses from charging.

Horses do not gallop toward an obstacle because their instinct tells them it is dangerous.
Therefore, they always try to run past a large obstacle that they cannot jump over.

A group of soldiers standing close together is such an obstacle...
The horses only run into such an obstacle if they are pressed together and pushed forward and have no way of avoiding them. Therefore, in cavalry charges, great care was taken to keep the horses in close contact with one another. A stampede of the horses is thus provoked from which they cannot escape.

The bayonets certainly had a frightening effect on the horses, but they are only recognized by the animals when they are quite close to the square.

But the blinking of the bayonets in the sun is an absolute fairy tale.
I can tell you from my own experience in reenactment that after three shots from a flintlock musket, the bayonet attached to the front is covered in soot and combustion residues.
The bayonets then look as if they had been painted black.
Nothing shines anymore... :smile: :wink:

Many thanks for the reply and the detailed explanation! I think things are a little clearer for me now amid the fog of war!

So you are a reenactor then? What period and type of soldier do you reenact? It must give you quite a good insight for when you are painting/modelling/wargaming with our little guys?!

Hello,
I´m member of the 5th Prussian Brigade since many years and still have all my gear.
But for health reasons I can no longer manage the long marches with luggage, gun and equipment.

But in the 15 years that I have been actively involved, we have been able to locate many historical sources. From this we were able to gain a lot of information, some of which was completely new, about the uniform, the equipment and the implementation of battle formations of prussian units.

We have published much of this information on our website.

You can take a look there (www.5-preussische-brigade.de).

But most of the texts are written in German.

Wow, that must have been an incredible event! Great pictures, very evocative! It’s a shame you can no longer march with your comrades.

If I may cut in here, thank you for the links. If text, my MSN software automatically asks me if I want to translate, so text translation is easy. Links to the Waterloo Re-enactment are just as is -authentic and amazing. Thank you everyone. So enjoyable with one or even two cups of coffee! - GC

I am pleased that this insight into the world of the Prussian Landwehr gave you some pleasure.

It was a wonderful time...

But I've made the decision that it's over for me.

Because everything has its time..