Nice to meet you here and thanks a lot for taking the time and adding extra effort to write this post. I would like to discuss this post with my team of students whom I am serving superb quality writing help at Elite Assignment - https://www.eliteassignment.co.uk/ where see what they say about it. Thanks.

a
Allan from Glasgow
86.22.185.88
Re: It`s Friday and time for the new Desert stuff.
Marco Zappa
Amazing figs for goumiers set...I hope to see a donkey or a mule and can I ask you if this set will include a woman raped ? Thanks !!
I have to say that is a appalling comment to make, Their is enough evil in war and we must not carry it into our hobby.

I can only hope it was a joke in very poor taste.

Lets enjoy our little armies and enjoy it for the many reasons we collect our chosen periods.

One can understand Marco's sarcastically expressed question insofar as the portrayed troops gained a largely dubious reputation among the civilian population during the Italian campaign.
Look up "Marocchinate".

Anyway, this is an useful addition to the French-Allied forces of WWII.
The Goumiers participated in discernible numbers in several campaigns & battles and were decisively involved in the eventual victory at Monte Cassino.
http://pub33.bravenet.com/forum/static/show.php?usernum=2833323740&frmid=6&msgid=1082055&cmd=show

Now that it is confirmed that these Goumiers are definitely designed for WWII, some possible next steps for the North African and Mediterranean theatres could be Tirailleurs Maghrébins & Sénégalais, Gebirgsjäger & Falschirmjäger in 1943/44 mediterranean appearance as well as correspondingly uniformed troops of the Hermann Göring Panzer Division? :wink: :smile:


Edit: While I was still writing, Marco had already commented himself.
Sorry about the somewhat overlapping posting.

Totally agree with the sentiments but Vichy troops have a wider application - Lavant etc.
m
Marco Zappa
151.48.228.101
Re: It`s Friday and time for the new Desert stuff.

Thank you Peter the great...I want only remember at all that just me have proposed at Strelets to do the goumiers...and gurkas too for Cassino. I know the ability of this "mountain's force" and respect the warriors. Is it so bad the idea to have ( like for the vicking set ) a civilian figs for a little diorama who rappresent one moment in history?
With sincerally friend and respect. Marco

My opinion is that war is a horrible thing but I think we play with soldiers to develop and learn the tactics of battle and enjoy or learn history even when painting uniforms.

When we make dioramas, we use to portray scenes of war and destruction but the main subject is to display a vehicle or some soldiers in action.

Who wants to display a diorama with an execution or a raped woman? What kind of hobby pleasure is that? Who needs to have that st home? Even if it represents a real thing that happened, why a person is keen to develop that project?? He should rethink about that.

I am happy my mind has not this deviation. I have that of portraying a battle escene but the aim is to show other things that carnage and dead.

As a colleague said, the reason why the veterans avoid to talk about war is clearly not to remind that horror. However they were proud of other things.

So who makes a movie like " la ciociara " with Sofia Loren being raped by goumiers or who the vietnam cruelty movie made by American soldiers ( Sean Penn, Michael J.Fox) is a mental deviant? But how are you doing? I'm going to close it here! I apologize to everyone if I have offended the sensibilitness of some but history teaches that it is not by hiding or forgetting that we learn from it. Friendly Marco. 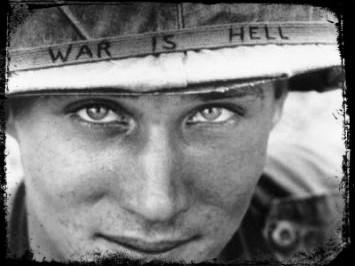 Can still remember the turmoil here and at other hobby forums when Caesar released their 1st set on the subject in 2006 (H031 Modern Urban Resisters).
Considered soberly, a successful set, but for some forumists it was already way beyond the bounds of what was tolerable.
http://www.plasticsoldierreview.com/Review.aspx?id=1044

For many hobbyists it seems more acceptable to limit drastic depictions to conflicts that took place further back in time.
The mentioned Vikings are a good example, but on the other hand there were also a few oversensitive comments on Linear-A's Varus Battle sets.
Although there might be geezers who would rejoice if there was an "appropriate" set on the Holocaust, ostensibly because it would be "so original", I would find it extremely distasteful.
The same blokes, however, would probably have a problem with the depiction of starving Boer families in british concentration camps... as would I, by the way.
This illustrates an often biased & undifferentiated attitude unfortunately displayed by a few.
Furthermore, it should of course be clear that an apparent "terrorist" can be a heroic "freedom fighter" for others.
Again a question of perspective, as so often.

Regarding the farcical attitude of being permanently offended nowadays, I can only agree. Such people often contribute nothing of substance other than endlessly repeating their indignation and obvious inability to fully consider & understand complex themes.

In view of the transgressions of the Gourmirs, one or more sets of various European (& perhaps East Asian) WWII civilians could be a reasonable solution. These often requested sets could also include a few restrained scenes regarding terrorised civilians.

Good and right words my friend.