Hello,
it's Friday again.
Pleased Tell us a new Figure-Teaser.
For me WSS please.

But whatever this weeks teaser is, I look forward to seeing it.

Great looking figures I cant wait to paint these troops.:heart_eyes:

They are so d@mned well done 'but'.

Well...:slightly_frowning_face: Much better than the British Napoleonic Firing Line, and the muskets with fixed bayonets are a definite 'Yes'. But...Heads/Highland bonnets look smallish, too many caps (and no head-swaps), although the overall sculpting is good. I'd question a couple of the poses though; the second firing figure in the bottom line is clearly a game keeper from the 'lean into your shot' school, but I am not 100% convinced that this is a Napoleonic musketry manual pose; the last figure in the second line is presumably clearing a mis-fire, but do we need four of this pose?

And, for those seeking to model Highlanders in defensive posture...no kneeling figures; although, let us be honest, there are plenty of kneeling Highlanders from other sets.

Agree with you Mark. This firing line is better than the last one.....but only just. The muskets look better & thankfully there are bayonets attached. Inclusion of forage caps is still a problem, and the feather bonnets dont seem convincing either.

But the main issue is the poses still dont quite reflect a real Napoleonic firing line. The 2nd firing pose is as you say, leaning forward and the last has his musket pointing down.
The firing figures should all practically be aiming level & stood reasonably the same.
Reloading figures, they key there is to remember that the rank reloading, would be all around the same stage of reloading, due to being well drilled. 2-3 reloading poses max is all thats required. As for which reloading poses, think at what stage the firing rank would be at ("present arms" or actually firing), then think where along the reloading stage the other rank would be at that time. I don't think they would still be reaching for the cartridge box for example.

Now this may sound like a boring set to some, but it should not be treated any different to any of the other "drill" focused sets. Marching, order arms, shoulder arms etc, they could be interpreted as boring to some too as they are all doing basically the same thing as well.....but thats just the thing.....they are meant to be!!! The ever so slight variations is what makes them good. Nothing too drastic.

Kneeling poses are best left for a "in square" set (especially for the British/KGL, highlanders & possibly Brunswickers), but for a firing line they are not too important. For a light company belonging to a line regiment yes, but then thats more for a skirmish line.

One other thing, if this is indeed the dedicated set for a Napoleonic highlanders firing line, this puts an end to the idea that the Crimean War highlander replacements were mistakenly attributed to that era but were actually meant for Napoleonics. They are now clearly meant for the Crimean war....which they are incorrectly attired for. Bonnets are completely wrong. Unforgivable when the older set had been done with the correct attire. Ironically, the firing poses in that set are better portrayed for a firing line.

I have to admit, Strelets current sets involving the Napoleonic era are not as good as they were....to me anyway. Not since there seems to have been a change in sculptor/designer.
There are often quite silly & easily avoidable mistakes. The cavalry sets, aside from the uhlans, just haven't got me excited either. And as it seems that this is the same person who did the new Crimean highlanders, other 1800s "musket" conflicts may not be safe either. 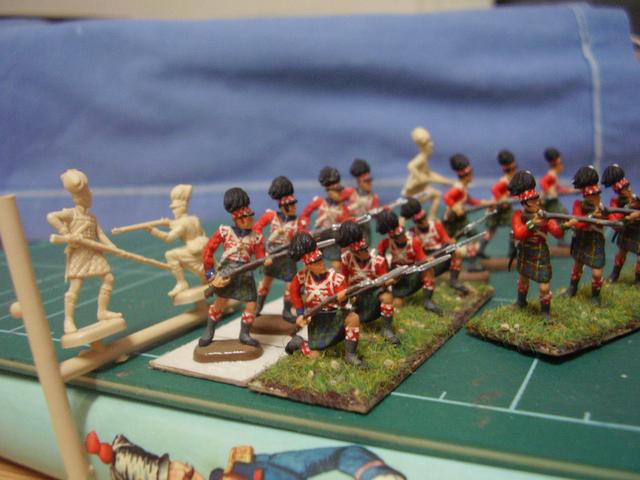 P.S. I'm several figures short of the advancing pose for the Gordons so I bought Strelets' Highlanders in advance set; I think they will fit in very nicely. The command and pioneer figures are fabulous too. Thank You Strelets.:relaxed:
r
Roger W
85.255.233.23
Re: Friday Teaser please