It's been ages since I last posted, partly because of a busy summer of work, but also because there is just so much to do incorporating so many figures into the diorama. As those who follow my work know, this is a team effort involving over 70 people aiming for a full scale diorama of Waterloo, to be located in the UK National Army Museum in Chelsea. We don't name individuals except by initials but I'm grateful to them all and welcome new members of the team.

A big part of this sudden surge has been the arrival of AD's wonderful figures. When I last posted, I had managed to get three Line battalions, two Landwehr and one Reserve battalion onto the diorama from the Prussian side.

Now, the number of Landwehr battalions will rise to ten, about 5,000 figures in all, many of which are Strelets. These Landwehr have been undertaken by a number of people - GH, MS, AD, the WU collective, LWC and JH, as well as my own. Several thousand Line Prussians are also ready to join them. One battery of guns is already on the diorama and another is ready to join. This battery is by MM and was featured some months ago. To see it now on the diorama is a real pleasure - it really is a work of art in its own right.

In among all these infantry, there will also be several Prussian cavalry regiments, masteredminded by LF, which are nearly ready to go. I have four new sections under construction which will create space to the north of Plancenoit for all these extra troops.

More on my Blog at http://generalpicton.blogspot.com 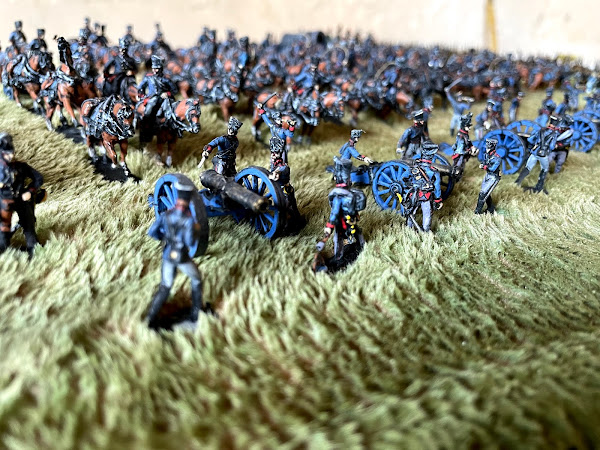 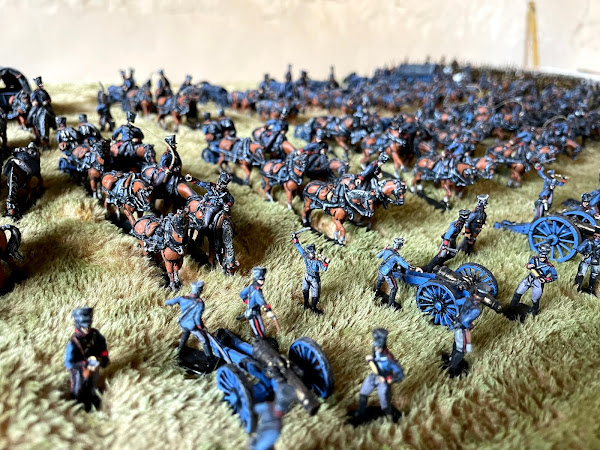 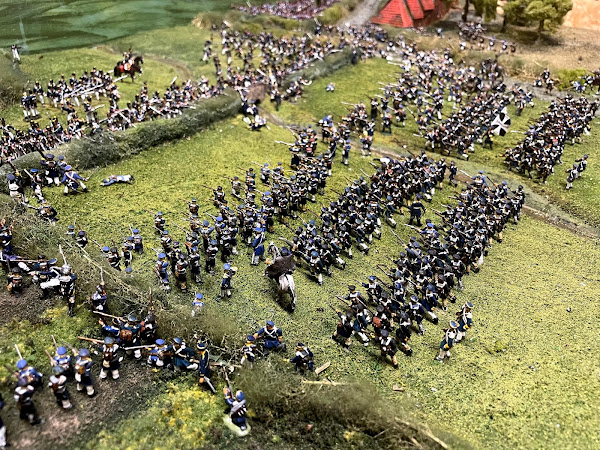 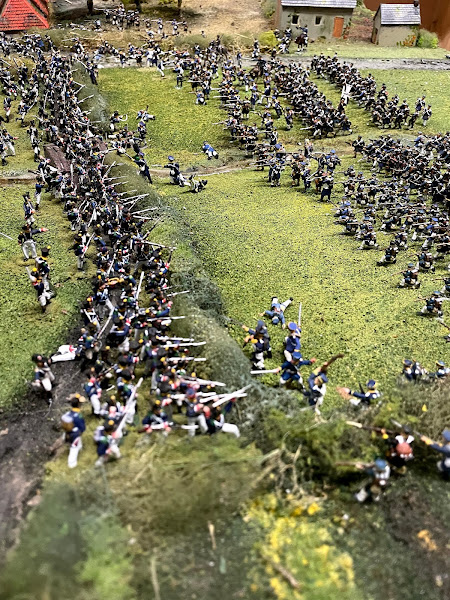 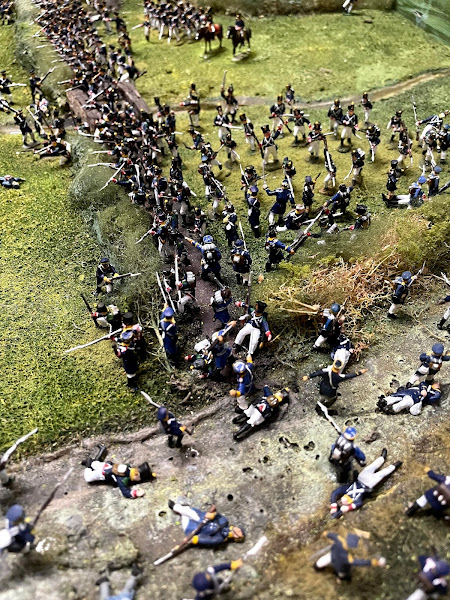 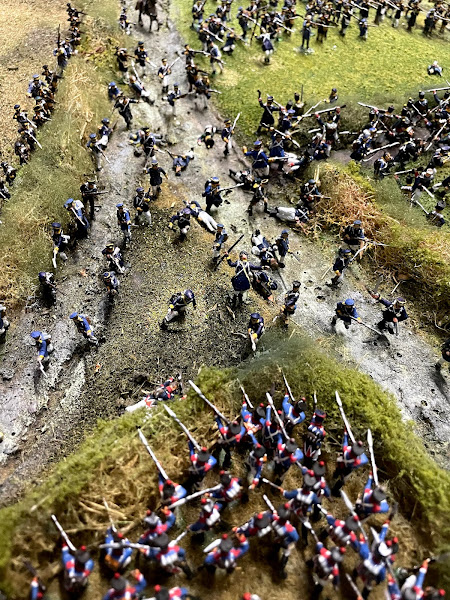 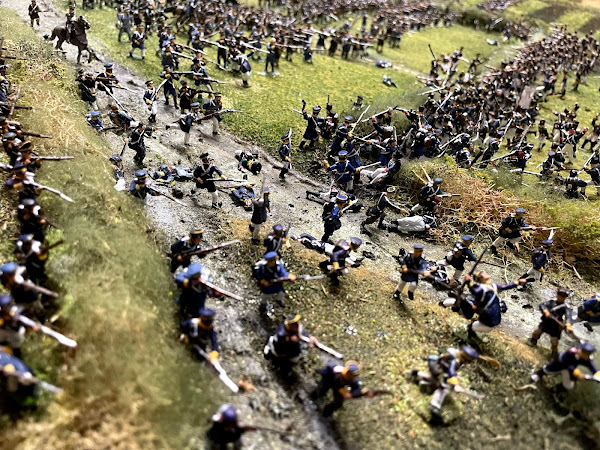 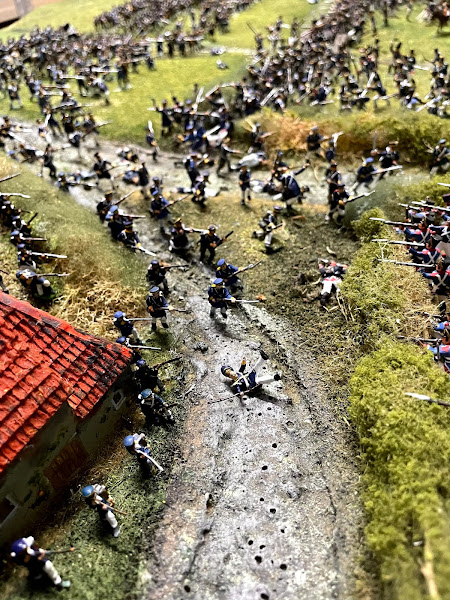 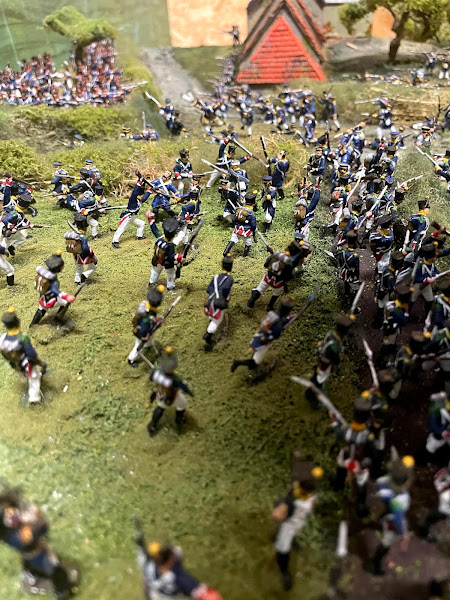 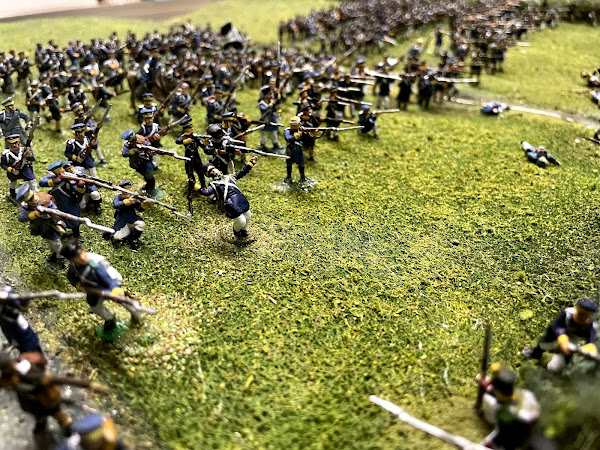 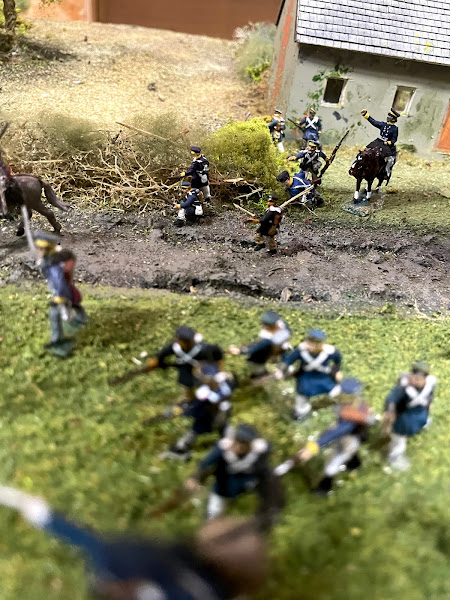 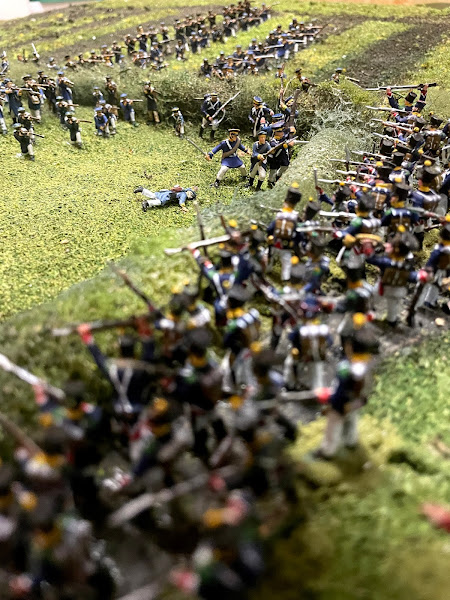 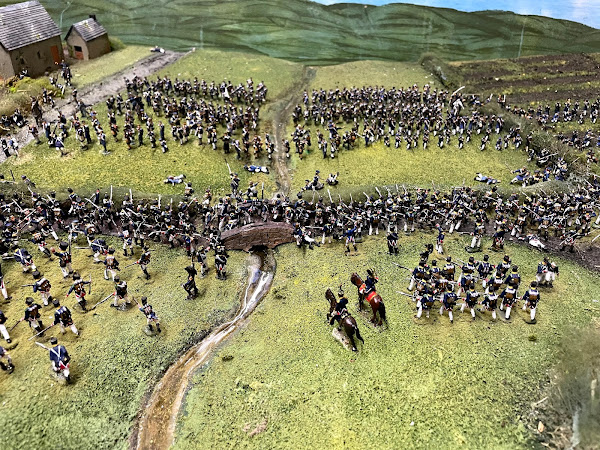 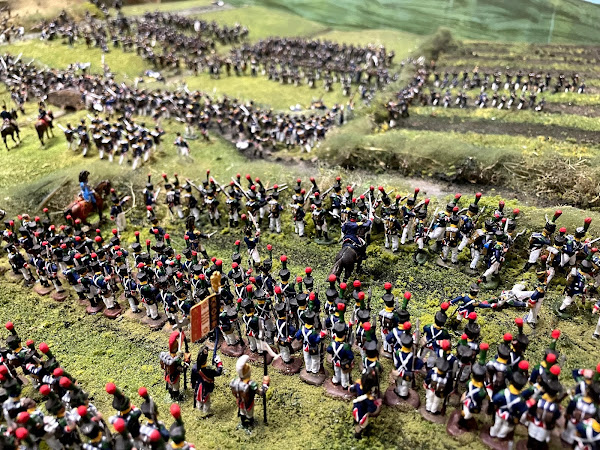 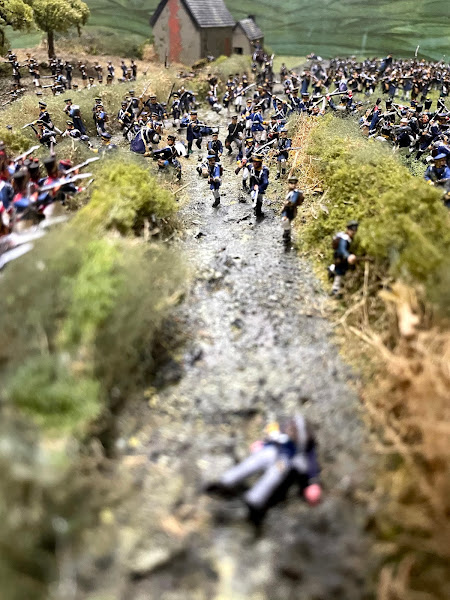 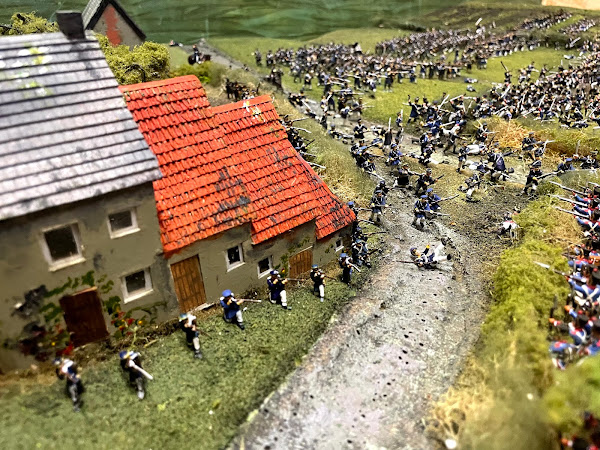 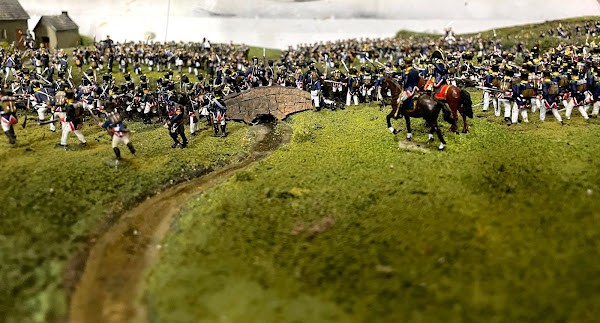 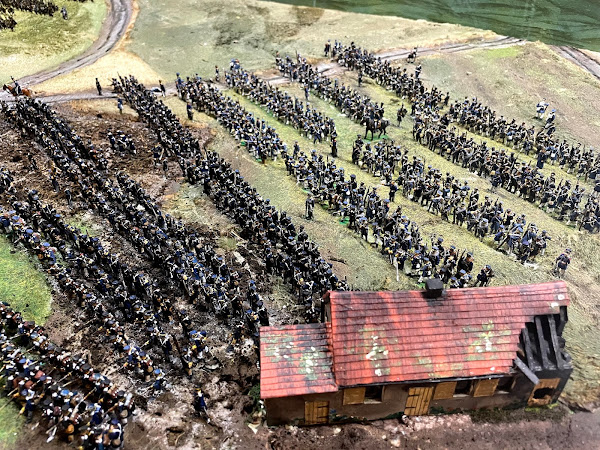 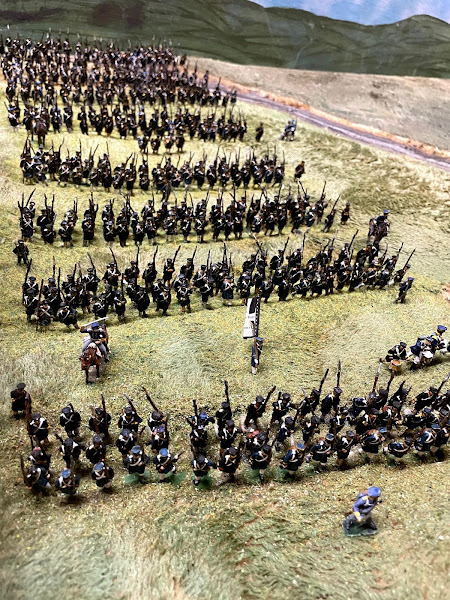 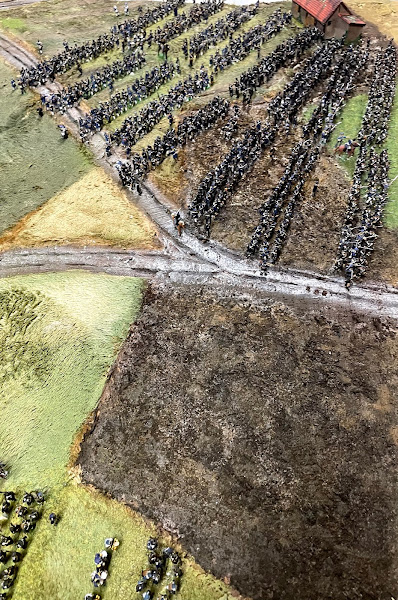 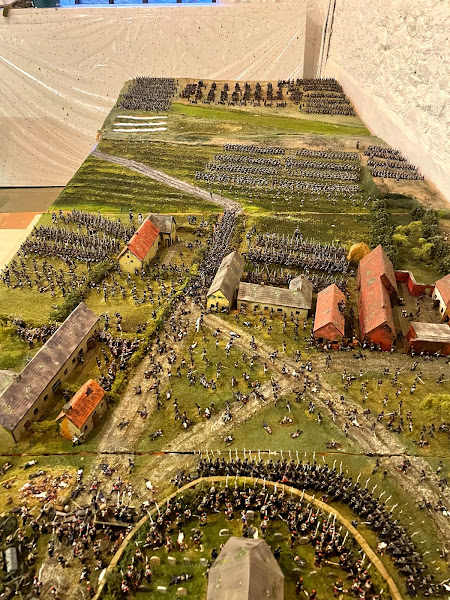 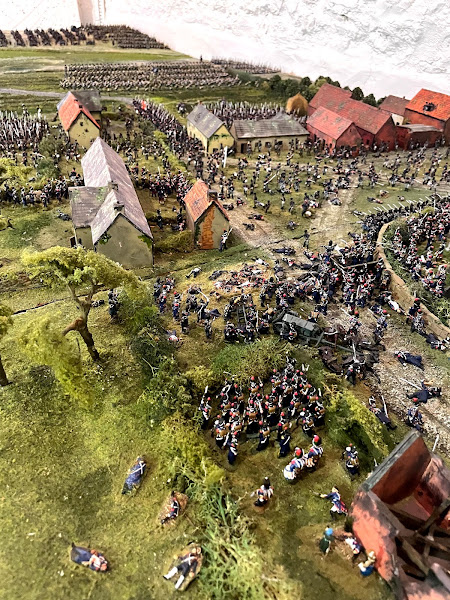 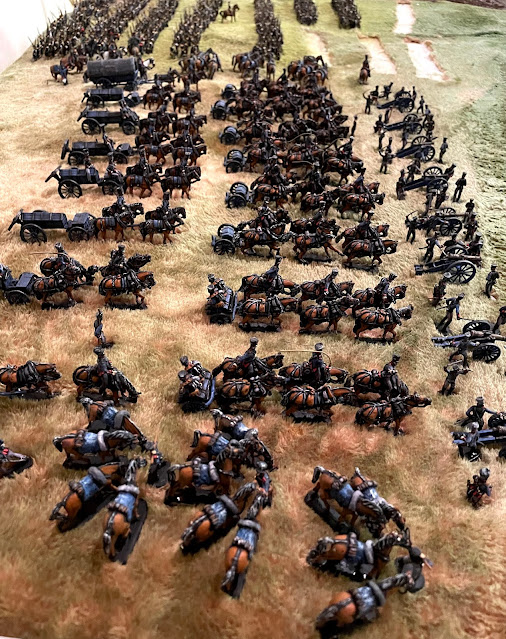 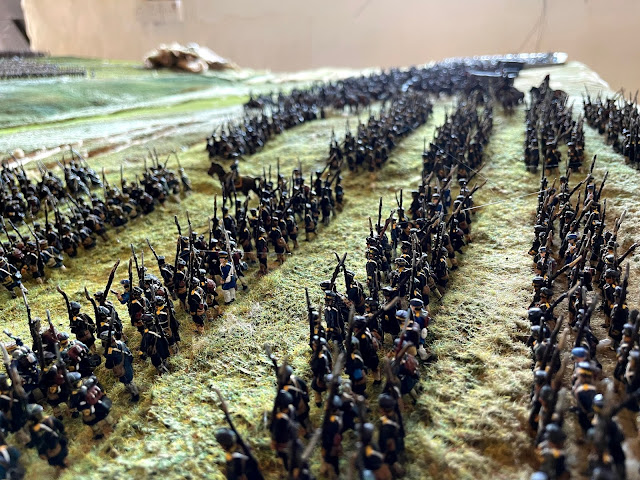 This looks more magnificent every time you post pictures. To see so many figures on a large table-top with excellent scenery is truly awe-inspiring.

All the figures are excellent, and co-ordinating such a large team effort must be quite a task. I am particularly impressed this time by the guns and their teams and limbers.

Is there a timescale for the diorama to be museum-ready? I can imagine this installed at the NAM as a real showpiece.

You are realizing a dream at least this hobbyist has had since I played out battles on the floors of my bedroom and living room when I was a boy. I always dreamed of "commanding" thousands of troops in huge battles - a general at heart.

I have the figures, but alas, no space to set them up right now. Looking at your pictures allows me to live the "dream" vicariously. Thank you for sharing this project.

Absolutely amazing! The amount of work alone not to mention the care put into the details cannot be praised highly enough!
Applause aside, just a question: should the artillery limbers and ammunition teams not be reversed to make it easier to limber up again and access the ammunition?

Many thanks Flambeau. In the advance (as the Prussians were in this instance), it is easier to drive the limbers forward and then wheel the gun round onto the limber. Hope that makes sense.

Hm, interesting. I'm no expert when it comes to this subject and it's difficult to find contemporary pictures of deployed artillery and limbers, seems few painters bothered to give these troops the attention they deserved. I always thought (without knowing) setting up a battery somewhat like this

makes more sense, but of course that's a but wargame.

Looking at pictures from deployed batteries in the ACW the limbers and horses seem to be positioned the way you choose for your model.

You may find this interesting regarding the deployment of horse artillery .


Sent from my iPad

A different era but the principles are the same.

Thanks, it's always fascinating to see these old pictures and I suppose your right as to the drill practice being almost the same as a hundred+ years earlier. I also noticed that they used teams of different colour for each gun in the battery, something that was also practised by the Napoleonic French army.
Though not quite related, if you don't already know it, you might like this one:

I hadn't really thought about where to place the limber/horse teams to be honest. I can though, from an equestrian point of view, think of
a good reason for having the limber teams etc facing towards the guns.

Trying to "reverse" a team of horses with limber back on up to the gun, would of probably of been more hassle & taken more time than they had on a field of battle. It's far easier to make a horse go forwards than backwards. So it would of probably been much faster and far easier for the crews to just simply bring the limber up close to the gun & then just wheel the gun around and attach.

My friend Nick Lipscombe tells me that the British drill was always had theirs facing forwards. There are some images that suggest the French drill was to have theirs facing backwards. There is no evidence that I know of for the Prussians. Ever keen to think through how these things would have happened for real in the congested space available with infantry to either side, I have allowed this battery commander to keep his facing forwards.

I comment more fully on your wonderful blog, which is always a joy to visit.

Thank you James, your comments are always very kind.

Simply stunning!!!
Always a pleasure looking at such wonderful work.

This diorama is just amazeing i love following it all the great pictures presented for my eyes keep it up and send more please.
As for the artillery set up its faceing the guns for attack faceing away for retreat so ive been told.

Thanks all, the guy who works on the guns is very talented. He is going to produce a full battery on the move next time.