Holding my hand up here about the differences.

It is absolutely true that if you look at some of the illustrations they would not look out of place in an army from 60-odd years earlier.
Funcken 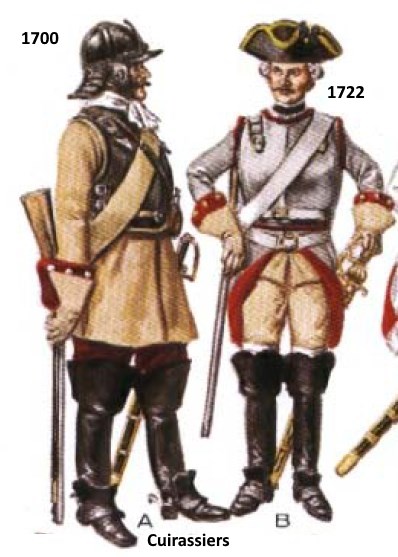 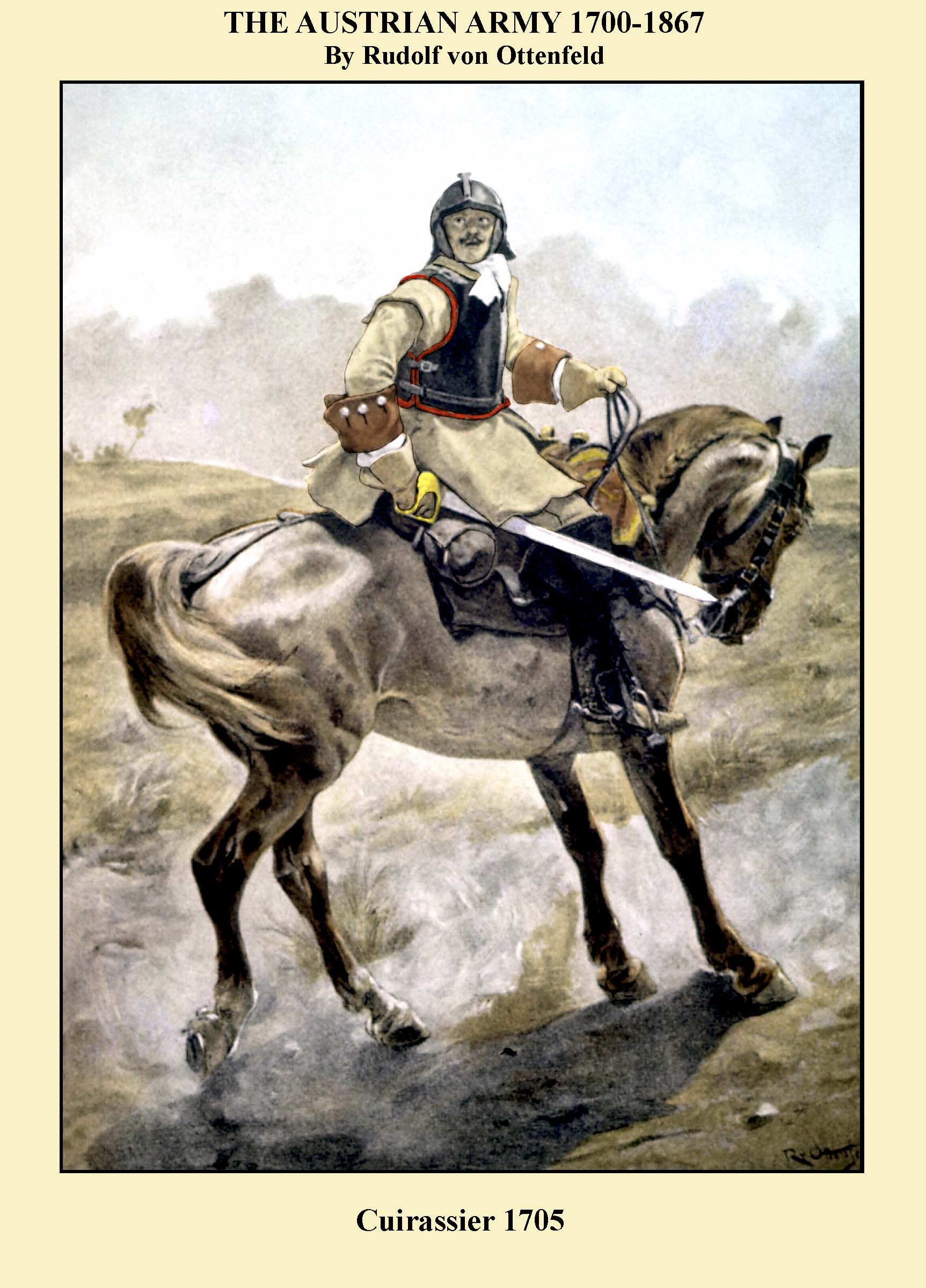 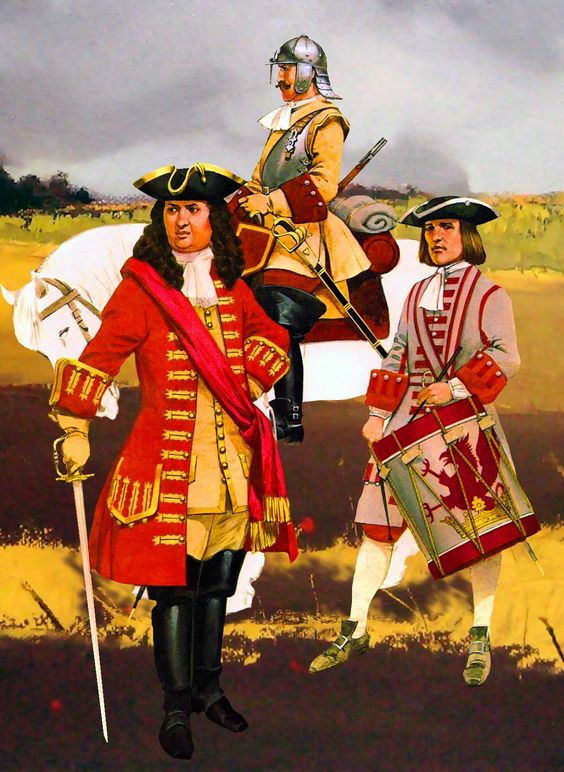 These artists have all illustrated a soldier who looks like he has been lifted straight out of the 30YW. The only difference they show is the size of the cuffs on the coat. In each example, the soldiers appear to be wearing either a buff leather coat, or as has been suggested, a buckskin coat (lighter, less expensive than buff and offering slightly less protection) to which has been added cloth cuffs of the Austrian chosen colour with buttons. These fit with the retrograde styling by being smaller than other contemporary styles (ie the soldiers can wear their gauntlets over them. Obviously the corselete and zischagge helmet look very similar to the earlier troops as well.

But the key here is the 60 years. Okay the armour is just as usable, but men's fashions had progressed considerably in that time period. The cuirassiers illustrated above are the equivalent of modern soldiers going into battle wearing the uniforms of WW2. The older uniforms would probably be perfectly serviceable but would mark the soldiers out by a mile.
By the Wars of the Grand Alliance and Spanish Succession uniform coats were longer and more full in the cut. Cuffs as discussed were huge and the coat tended to have a 'pocket' low down towards the hem.

This illustration by Mark Allen from Armies and Enemies of Louis XIV - volume 1 - Western Europe 1688-1714: France, Britain, Holland suggests a more accurate look. This figure is probably more accurately a light Horseman or Harquebusier, rather than an elite cuirassier. He wears a buff coat under his corselete but look at the way his coat extends below the bottom edge of the buff coat. Incidentally the helmet is the English triple barred pot helmet, also known as a Lobster pot. 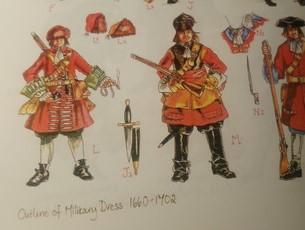 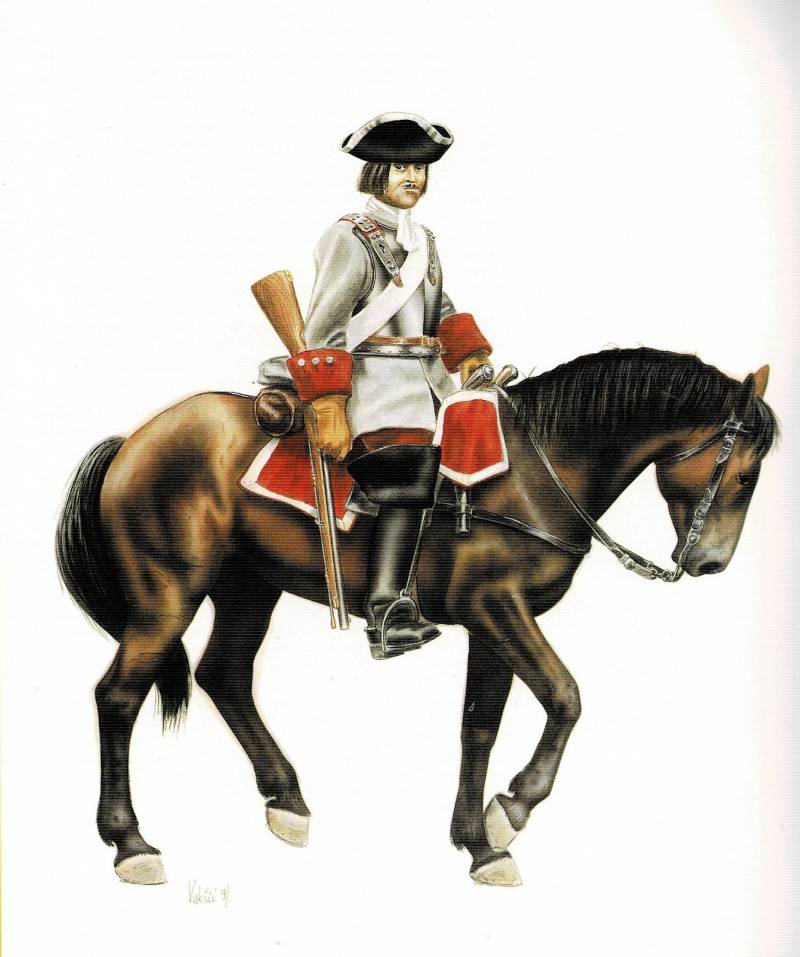 These two illustrations by Anton Hoffman-Muenchen show Bavarian cuirassiers - one of them an
officer and they show perfectly how the same information can be interpreted with appropriate acknowledgement of the styles and fashions of the period. 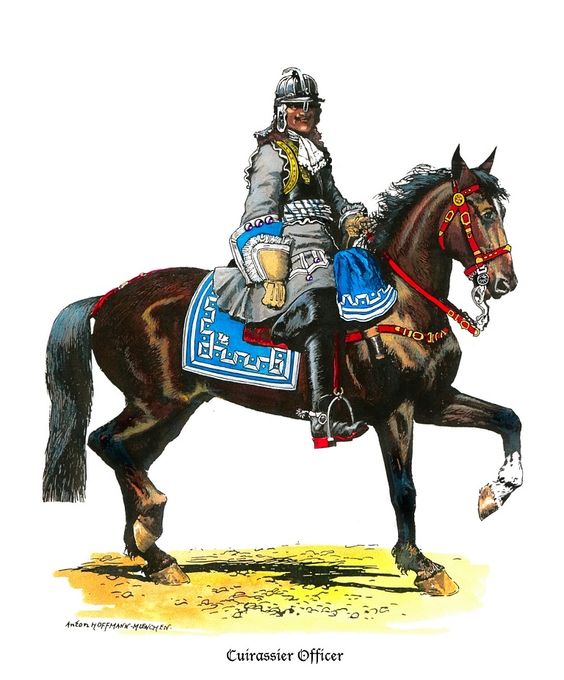 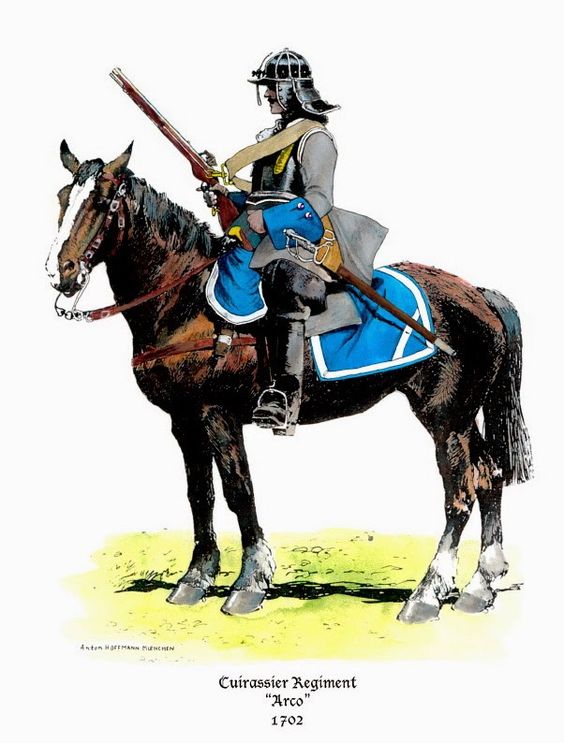 (In terms of full disclosure, I googled Austrian Cuirassier 1700 as suggested and pulled the Vuksic/Grbasi, the Hoffman Muenchen and the Ottenfeld illustrations off there, I hadn't seen them before but they serve to illustrate this perfectly. The Funcken, McBride and Allen illustrations I have already in books but used net versions because it was easier)

With regard to the helmetbhat issue, I am not sure it is that gig an issue really. Heklmets wear out, soldiers discard them, Colonels, who pay for these things say - helmets be blowed, they can have hats with a secret under them (a metal skull cap). I think it's not that big a story.

So, what am I saying?

The point is that there is no simple answer, there are very few contemporary illustrations to definitively say one way or another. You pay for the figures, then you are fully entitled to do what you want with them.

Of course, it all depends on the figures, For example if you want WSS Austrians take some of the Revell Swedes, a little bit of tape, fix the cuff issue and bish-bash-bosh! done.

If you want to retrograde Strelets figures to 30YW - enjoy.

For me, I shall leave well alone - as may be apparent, I lean firmly towards the long coat style of cuirassier. They were elites, imagine saying to a bunch of elite troopers "by the way, we're giving you the same uniform your grandfather wore". I bet the hair powder flew that afternoon!

Of course what would solve the whole issue, as mentioned elsewhere, would be for Strelets R to produce a range of 30YW/ECW figures equal to the WSS range and I for one, woud be in absolute heaven.
Email
m
Minuteman
79.77.206.12
Re: WoSS cuirassiers/armored horse

I think this one already takes the prize for the 'most detailed and most illustrated thread for quite a long time'!

I have nothing to add to Mr Pickstock's insights, other than to agree with them. For what it may be worth, here is what I may term an 'old school' view:

Once upon time (let's call it the 1970s) there were very few 1/72 or 1/76 (OO/HO) scale plastic model soldiers. Most were made by Airfix, a few by ESCI, and not many others. In those days, we used to make do with what there was...and a cuirassier/harquebusier of almost any era from 1640 to 1870 would start life as an Airfix 'French Waterloo Cavalry' cuirassier.

My point?: We cannot afford to be too specific here. For instance, with enough skill and patience it is perfectly possible to convert an excellent Revell TYW Swedish Cavalry harquebusier into a reasonably convincing WoSS cuirassier; and the other way 'round too. In 1/72 scale, unless you are a real perfectionist, this is eminently possible.

I for one actually look forward to any armoured cavalry from Strelets for the WoSS, helmeted or tricorned, because I know that they will have done 80% of the work for me, perhaps more; I can do the rest with head swaps etc. It is a lot easier than the old days and having to convert a rather poor Airfix Napoleonic cuirassier.

Maybe it is time to adapt and remember how lucky we are compared with the 'olden days'.....

Email
s
Steve Pickstock
86.5.153.126
Re: WoSS cuirassiers/armored horse
Minuteman
Maybe it is time to adapt and remember how lucky we are compared with the 'olden days'.....

Sure. We are a bit spoiled by the range and quality of minis added in the last twenty years. I remember well the days when British AWI grenadiers had to pose as Napoleonic French Old Guard and how happy we were when they actually produced the real thing (though they were a wee bit too small) And a lot of my old Waterloo British Hussars still have to serve as Austrians for the 7YW (maybe dear Strelets will some day remedy this ???). These are lucky days indeed for any collector - just wishing they'd come some years earlier :wink:

On a side note: Many of the "modern" illustrators tend to copy from one another thus sometimes perpetuating misconceptions. Personally I prefer contemporary paintings, eyewitness accounts or museum exhibits of the real stuff, but, alas, even these may be misleading and are not as easy to come by for this period as for the Napoleonic wars, and while doing a little research is part of the fun, I'm very happy with absolutely every set Strelets adds.

Oh, and a question: There's a famous painting by John Wootton of the battle of Blenheim, showing allied horse in red coats with front and back cuirass over the coat fighting french dragoons in yellow. Anybody got any idea who these fellows (both) might be?

It is interesting. I was musing yesterday about something similar to the above from Steve and Mark regarding the production of 1/72 plastic figures; does one want flexibility or ultimate accuracy?

As you have said Mark, with a small number of sets of 1/72 plastic figures available in the past, flexibility and conversions was the order of the day. Nowadays the rate of production seems to almost exceed the development of ideas about conversions/alternate uses, let alone actually doing them!

I guess that, to paraphrase Mark's point above, it is likely that a combination of the two is ideal. Figures that are 80% right (most of them are in the 90s, for mine at least) are 'perfect' for the subject on the box, especially at the scale and most common distance of viewing, but also ideal to use for others. Let's face it, one can never have *all* figures for *all* periods and it'd be a pretty unhealthy state to be in too, I'd suspect.

So Steve, Strelets producing figures for the Thirty Year War? It could well happen. I have been happy to gather some Mars, Revell, A Call to Arms and other figures to use (eventually) for English Civil War (yes, the Waterloo 1815 too). Perhaps more likely Mars will update their range, applying the much improved production, excellent subjects and range, like their recent Second World War and 1/32 Napoleonic figures. Who knows? That lack of certainty and the surprises that we get (every Friday in the case of Strelets) are all part of the fun.

Anyway, more than enough musing from me.

An insightful, thought-provoking and objective thread. Thanks for staring it Flambeau and for the excellent contributions.