Oh my goodness, I might have to create a collection of British artillery over the centuries.

Email
h
Handlewithcare
83.76.109.162
Re: Changed my mind......(WoSS British Artillery)
Minuteman
Wow, this is turning into quite a week and it is still only Tuesday!:grinning:

My only (slight) quibble is that the tools (rammers/sponges/linstock in particular) actually look a little big for the smaller gun of the two. But this is a minor point, all round 10 our of 10. The officer with telescope is another masterpiece. Great!

Dare I hope that the two artillery sets will be released at the same time, perhaps with some cavalry?

I didn't know that battalion guns were a feature of the WSS era. I was under the impression that massed artillery batteries were the order of the day - as shown here, for example ...

And those guns - honestly - they don't look very convincing to me. The strangely flat angled attachment of the dolphins to the tube, no metal brackets to reinforce wheels and carriage, the funny vertical position of the carriage eye, or eye-ring for a handspike?, etc. ...

Reasonably, the guns should be redesigned.
m
Minuteman
79.77.206.12
Re: Changed my mind......(WoSS British Artillery) Battalion guns

There is compelling evidence to suggest that parts (at least) of Marlborough’s army during the WoSS had battalion guns of 3pdr calibre. This was a practice that, in the English army, went back some decades:

"The idea (of attaching two small guns to each battalion) was, of course, repeated in much the same way, and again at two guns per regiment, by James II in 1686 and 1687, when the pieces were specified as being ‘3pd’. Marlborough too issued similar pieces during the War of the Spanish Succession and similar artillery was issued to battalions and regiments throughout a great many armies of the Eighteenth Century and as late as the Napoleonic Wars in the French Army."

Some of these guns may have been of the ‘galloper’ variety (eg: similar to that modelled in the Zvezda Artillery of Peter the Great set).

(The above article (by Stephen Ede-Borrett) incidentally also has a separate fascinating piece of research on what it took to ship a ‘trayne of Artillery’ overseas, with a substantial inventory for a fairly modest artillery force sent from England to Portugal in 1703.)

It is unlikely that the practice of allocating supporting artillery to infantry deployed in the front line of the battleline/defending built up areas (‘fortified’ villages eg: as Blenheim and Ramillies) would be ignored by the armies of Louis XIV, and indeed (famously) the peculiar triple barrelled artillery which was captured at Ramillies in 1706 was ‘light’ artillery and mounted on small carriages…although probably not quite as small (and unstable) as this example in the Royal Artillery Museum in London, which is almost certainly a ‘replica’ carriage painted in British Artillery grey:

This light artillery cannot have been part of a ‘Grande batterie’ of heavier pieces, and so was clearly intended for infantry support. Allocating more conventional single-barrelled ‘light’ 4pdrs to French (and allied?) infantry is entirely reasonable in the light of an ‘infantry support’ tactical function, albeit on a more limited scale than might be the case in Marlborough’s army.

The map of Malplaquet is fascinating and Thank You for the link. I’d suggest however that artillery shown on such maps would indeed, be the heavier ‘Grande Batterie’; and that smaller pieces would simply be part of the infantry ‘blocks’ ie: not shown.

The smaller of the guns in the forthcoming Strelets sets are certainly very small, possibly too small, but I will use them on the tabletop nonetheless as representative battalion pieces. The larger of the two guns looks ‘better’ as a 3 or 4 pounder, at a stretch possibly a ‘light’ 6pdr, although in the absence of a model to measure accurately I cannot tell exactly what the barrel length is. This gun is clearly a great deal smaller than, say, the French 24pdr, and it might have been preferable had Strelets chosen to provide a heavier piece in one of the two artillery sets to allow a convincing 'Grande Batterie' to be modelled. But both sets, on the strength of the excellent crew figures, are excellent additions to the WoSS range.

Thanks for your extensive reply. However, I've noticed that you didn't say a word about the design of the guns. So the weird angle of the dolphins, the complete lack of any decorative elements on the tubes, the lack of iron brackets to reinforce carriages and wheels, and even that really strange positioning of the "eye" at the tail of the carriage, all this is perfectly acceptable to you? Truly amazing ...

Wow, I can see what you all mean!

A lovely looking set. One that is eminently useful for other nations too, including those further north—not that one needs to at the rate that Strelets is churning them out!

As Radders noted in another thread; it is only early Feb. too.

Whilst not a period I collect the current WSS figures are looking really attractive and it is great to see fellow forum members so happy and contented with these sculpts.

Who knows, perhaps they will tempt me further along the way! Strelets,you deserve much praise in your subject manner and hard work. Can't wait to see what other fascinating ideas you have planned for us your loyal followers! Fingers crossed for more deserty delights, (I'm sure Alan agrees !?) Polish-Russo war and early WW2 .. but whatever you do we watch with baited breath ...

Will not buy any set of the Strelets WSS range unless there are some troops for Prince Eugen.

Could these pass for artillery if the Jacobite Wars (45 rebellion)?

Graeme
49.187.248.231
Re: Changed my mind......
Michael Watson
Could these pass for artillery if the Jacobite Wars (45 rebellion)?
There's no facings or turnbacks on the coat, the cuffs are too big, the pockets look a bit too pronounced and are horizontal rather than vertical, and the neckcloth should perhaps be tucked in.

Otherwise they're not a million miles away, you could perhaps do something with paint and an exacto knife but I believe that Harron is sculpting a Jacobite Rebellion R.A. set for Redbox which should be a better option. Erich Von Manstein posted a picture on Benno's: 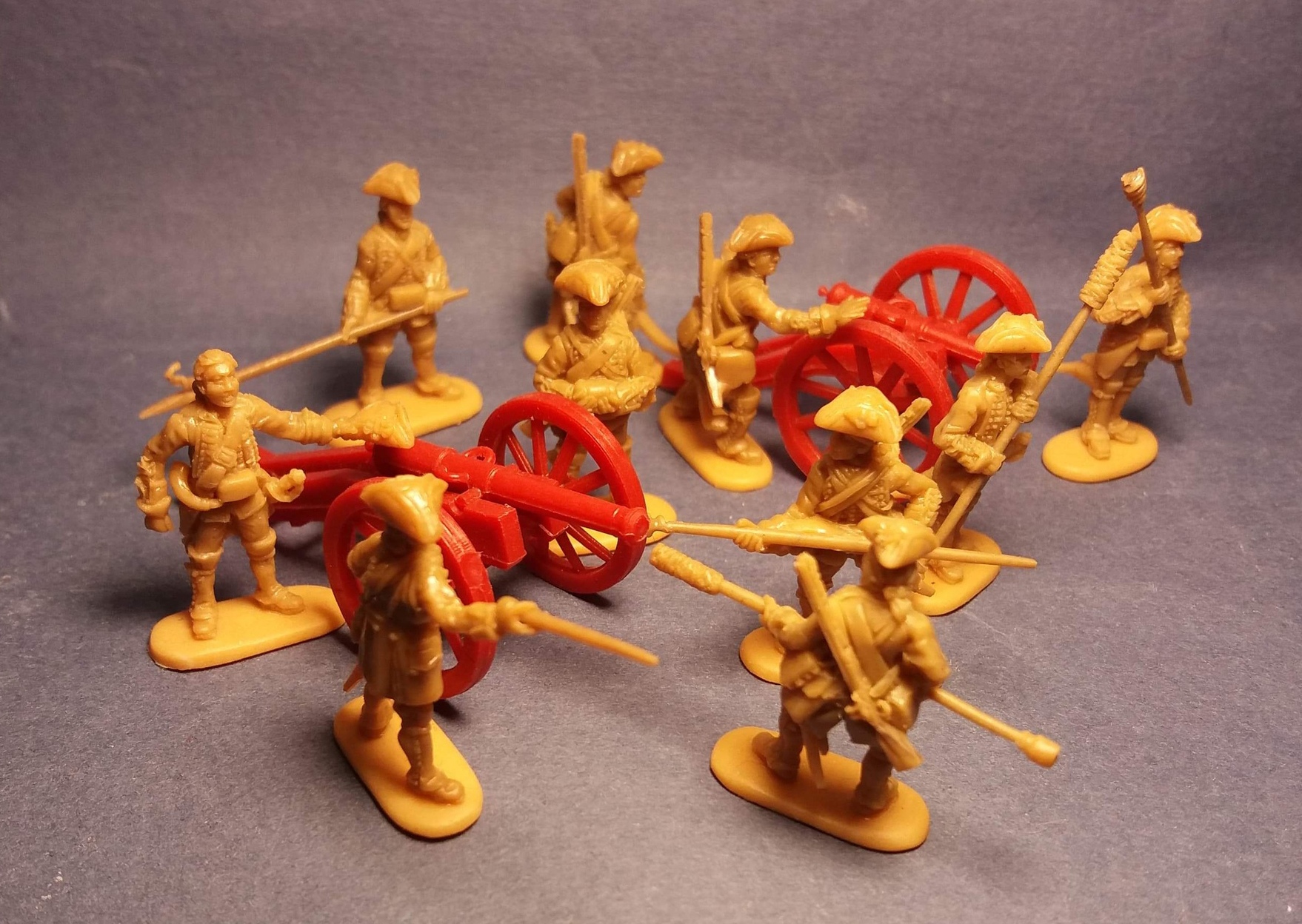 Like the other WSS sets I will be looking at these to see if I can use any for the 45; Senior officers or perhaps Jacobite artillery in civilian dress. The officer with the telescope is very tempting.