Agreed about the cavalry. Sabres drawn, resting on shoulders while standing awaiting orders would suit me. I wouldnt bother with standard bearers for cavalry to be honest. Id rather another officer or even an NCO. If the cavalry set is one thats in combat or charging, a falling wounded pose would be better than a standard bearer in that context.

As for the standing sets of infantry, yes, i agree Gerd there is a place for them, but I dont think it should become the entire basis of a range of Napoleonic infantry. One set for each nation with a mix of the standing poses included would probably of been enough. After all, are we going to see a set each for infantry firing stood up, a set for kneeling firing, a set reloading stood up, a set kneeling reloading etc etc?
Yes I have bought some of the standing sets, but no where near as many as I would if they had been in firing, in defence/square, advance etc etc. The Marching and Attack sets i bought way more of than the standing ones.

Put it this way, taking the Brunswick set as an example, how would sales be if it had been released as the line/light "in square" as opposed to just the Leib battalion standing?

Put another way, recently talking about getting kids interested, what would capture a kids imagination more? A set of Infantry that can make a heroic stand/successful attack? Or a set just standing there as if being inspected? I know which set I would (& did!!) choose!!

We're talking about Hannants most popular list. Yes this is one shop and doesnt represent every corner of the globe. However what I have done is offer my opinions as to why certain Nap sets havent done so well. I would love Napoleonic sets doing every single thing a soldier could be expected to do, doesnt mean some of those things would make great sellers though.

Hi
Would love to find a place that sells Strelets figures in Ontario . They look great.
Cheers
David

Like many folks on this forum I've been collecting toy soldiers for many years and have a huge collection; many thousands painted and many, many more remaining to be painted. Knowing I have many more miles in the rearview than I have ahead I doubt I'll ever finish the figures I have waiting and find myself abandoning many projects and eras to pursue my interests.

Reluctantly, I stopped collecting WW2 in 1/72 scale preferring the more colorful pre-20th Century "Age of Muskets." I love the LRDG figures and am glad my friend Alan (among others) has finally gotten his long sought-after set. It doesn't make much difference to me other than I'm happy for my fellow collectors and it gives me a chance to "catch up" on my painting while I'm waiting for new sets in my now-limited range of interest.

Now concerning the "at-ease" and other relatively stationary sets Strelets-R has been producing in prodigious quantities the last couple years or so I might be in the minority but I am all for them. I have literally decades of 1/72 Napoleonics from about every major producer (that I know of) in all those years I've collected hordes of firing and loading poses - I won't reject any new ones produced but I don't really "need" any more. What has been lacking for me are the aforementioned 60% of an army that is behind the forward line of battle waiting their turn to go in or moving from "point A" to "point B" - remember when you were doing good to get four or six marching figures or three or four standing figures in a 48 figure box? How many boxes it took to get a decent formation together?

What Strelets has done is filled a huge gap in that area. Looking at what they did with their ACW series I have no doubt they have firing lines up their sleeves - but for me, I'll be glad when I can finally line up my entire armies with combined new troops and old figures. I just hope I don't run out of table...

"And STRELETS is the only manufacturer that has recognized this gap."

I'm with you Gerd, I really like the quality, novelty and variety of Strelets' offerings. It was great in the most recent release to have a range of eras and campaigns represented, not to mention types of troops and poses. Something for so many of us, as the comments above attest.

I have all of the Napoleonic sets from that release on order from my 'local' supplier so they should arrive sometime in the New Year. Dunno if that makes me part of a 'silent majority' or the exception that proves the general rule?

Two or three sets of each.

- Those Bavarians are too lovely to pass up (as the others have been) and I am happy to have a 'luxury' quantity of them, especially for the ability to mix and match poses across units or to make units in a specific set of poses.

- By serendipity Strelets' late Russians came at a perfect time for me to get figures together for plans for the 'Napoleonic' vigbicentennial /quasquibicentennial (1796–1815: 2021–2035). These latest are a great addition to those. I am hoping that Strelets plan to complete the 'series'?!

- The Prussian 7th Uhlans are a beautiful set with great potential for conversion too. Hopefully a couple of those will be 'enough' for me...

One shop does not the market make. I'd love to see Strelets' own data on sales, just for these or even across their vast catalogue(!), but I respect that this may be commercial in confidence.

Actually only the WSS British Cavalry (position 11) and LRDG at rest (position 20) are still under den TOP20 by Hannants.

By the big german e-shop Kamar and after 10 days the WSS british Cavalry (formerly 50 boxes) is already sold-out, the LRDG- and SAS-sets (formerly 40) are between 11-14 still to buy - the bavarian sets (each 50) are around 9 and foreign legion sets around 24.

And I share the interest to receive more action and shooting poses in the next Napoleonics sets - especially russians, prussians and brunswicks.

I like very much the recently presented WSS french dragoons-set. An action (shooting, fighting, scouting) dragoon-set would been a dream for a very numerous french cavalry type with many regiments. And surely WSS austrians.too....

m
Minuteman
92.0.223.18
Re: Then Christmas Number 1
sansovino
Actually only the WSS British Cavalry (position 11) and LRDG at rest (position 20) are still under den TOP20 by Hannants.

By the big german e-shop Kamar and after 10 days the WSS british Cavalry (formerly 50 boxes) is already sold-out, the LRDG- and SAS-sets (formerly 40) are between 11-14 still to buy - the bavarian sets (each 50) are around 9 and foreign legion sets around 24.

And I share the interest to receive more action and shooting poses in the next Napoleonics sets - especially russians, prussians and brunswicks.

I like very much the recently presented WSS french dragoons-set. An action (shooting, fighting, scouting) dragoon-set would been a dream for a very numerous french cavalry type with many regiments. And surely WSS austrians.too....
I agree, the WoSS French Dragoons set looks very good indeed based on the master figures we have seen.

I'd like also to see some dismounted French Dragoons, although I accept that it will be possible to convert these from existing figures. But even so.....

you have mentioned it already that you can create easily dismounted dragoons with existing miniatures (the horses from the new set and the dismounted soldiers with slightly transformed french grenadiers or head swaps).
I think the need for fighting or attacking dragoons on horses is still greater.... dragoons were the main french cavalry type!

Of course, I'm happy for Alan that his big wish has gone into fulfillment and that there are finally such beautiful LRDG sets. :wink:

And the sales success in the UK is also great. Because only if STRELETS sells many sets, new sets will also come on to the market.

Maybe this set of Black Dog is interesting for you : 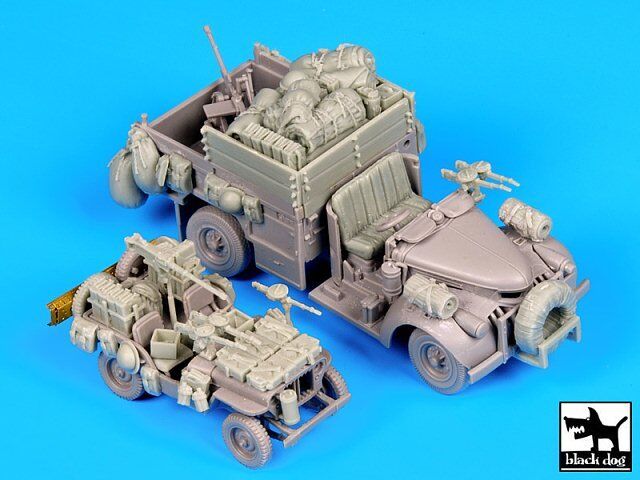 Very interesting discussion about the new Napoleonic sets. I think they all look great, but I am only focusing on the "On the March" and "In Attack" sets because they are the most active. Although the other figures standing at ease, at order arms and at shoulder arms are lovely sets, they seem more appropriate for the parade ground than for the battlefield, although I don't know if they may have also been in these formations while waiting their turn to go into battle.
It is also my hope that Strelets will produce In Attack sets for the French, Russians and Prussians.
But overall this is a great range. Am also very happy for the LRDG sets, as the only previous set of these men by another manufacturer was badly sculpted and very hard to get anyway.