I've been away from the Punic Wars for a few years and am working to revive it for my little group of wargamers next year.

Currently, I'm painting 48 Polybian Romans from Newline. This will add a 4th Legion to my forces. After that, well I have Carthaginians (including Celts & Spanish) but....

What if I could get another army to battle the dastardly Romans……..how about Greeks…….do I really want to buy & paint 200 more figures……

Well, as it turns out, I have 9 potential units out of about 12, ready to go.

Last night I spent some enjoyable hours going through the collection. I found painted & based units I’d never actually used ( mostly HaT including some converted Thureophori, a Greek Light Horse unit, 2 Mercenary Hoplite units with 48 figures in them alone! & half a Greek slinger unit – which are Zvevda figures).
Additionally, I can use some Celts: armoured Cavalry & Armoured infantry (Soldurii) units : all nice Newline figures: several Greek states hired Gaulish or Galatian mercenaries.
I’ve added to this from my Carthos a Catapault unit (with Greek crew), 2 Nellies & there’s a Cartho general, mounted & in Greek armour, who could easily pass for Greek.

If I bought some more Greek generals, a few more slingers to bring the Zvevda unit up to strength, say 4 bases of Offensive Spear Thureophori & maybe 4 bases of pike I’d have an army. Maybe a unit of Greek Xystophoroi? Xmas order from Newline?

This force more or less resembles Pyrrhus’ army but could be Syracusan Greek, Aetolian or even Pergamum Greek. At a bit over 600 points, it would provide a nice night’s gaming against a 3-4 Legion Roman army.

So, lots of Ancients painting for the present & future.

Awesome! I am huge Carthaginian fan myself. The Hat elephants are great.
Really that is some of Hat's best work on that whole line.

Excellent to hear! Last time I ventured near that area was to explore the Siege of Rhegium in 386 BC. The Italian Peninsula is always fertile ground for the Classicals, a great place to use Oscans, Etruscans, Sicels, Celts, Greeks, Latins, Carthaginians, and Iberians.

Linear A are, of course, proposing to release two sets on the subject.

I doubt if they'll provide any wargame units but should contain a range of speciality figures (eg Pyrrhus himself) that will enhance the army.

Our friends at Strelets, sadly, aren't overly interested in Ancients.

Yea, quite curious to see what they come up with. So far it has been a mixed bag in my opinion. The Silk Road set is a really fun one with some nice animals and figures that are useful for many Hellenistic marching formations, but their infantry sets so far have featured shield poses that are more flat than I would desire. Their historical research has also messed up a few times, as the new marching hoplites hold shields that are wayyyy too small and the Etruscan warriors are basically all chieftains except for one or two poses, which is not terribly useful. They are also promising a set with sarissa phalangites, which will be quite the challenge for them given what has been shown so far. Fun topics though, and as my username suggests I will have to pick up a copy of the Old Babylonians if they make it there no matter how good they are!

my main drive is to finish as much as possible of my year plan by the end of the month. But first here's my progress on a pair galleys 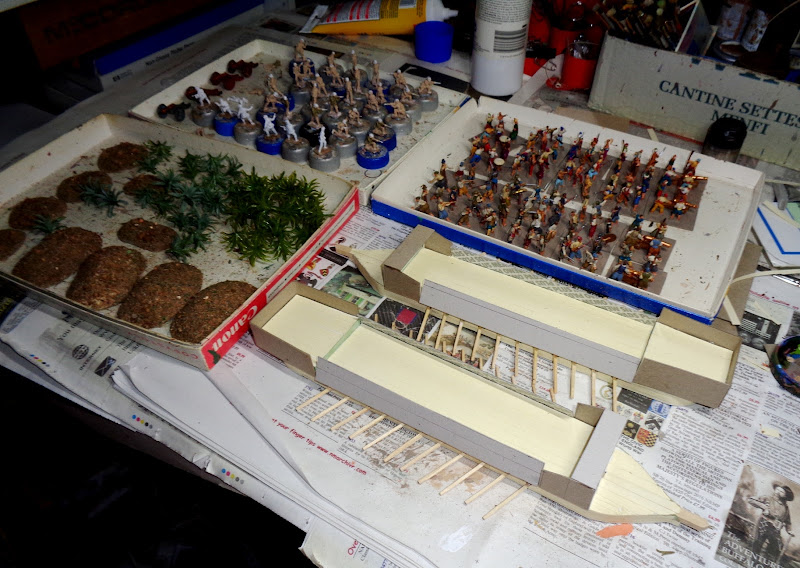 I'll be working on
Finishing the galleys (as seen above the crews are already finished)
Some hard plastic figures from Esci to fill a few gaps in my DAK
Some cactus patches
Napoleonic Austrian cavalry
Crusader Turkopoles and dismounted knights/heavy infantry
SYW Austrian pioneers/miners
Cruel Seas - German S-boats, British MTBs and US PT boats

Last lot I did crumbled to dust after a little while. I was not a happy man when i had this discovery!!!! So now painting up replacements. The limber and baggage wagon boxes are still that rubbery plastic as bought them while back. Ammo caisson box is harder plastic that Hat has changed to now. Bought that last month hence difference in plastics.

Was using enamels back when painted them the 1st time so hopefully acrylics i now use will make the difference.

Once done them (again!), i have a box of Strelets French Armys Camp to paint 😁

I am just finishing off painting some PSC marders & half tracks then I am going back to finish strelets Bavarian infantry sets then on to the 4 Prussian cavalry sets that should take me up to Xmas I think.:blush:

still working on my Napoleonic project, to keep it interesting i tend to work on different units at the sametime, so on the workbench at the moment are French line infantry being painted as penal units and the recently released Franznap Baden hussars and a dismounted Napoleon offering snuff to an officer of his escort.

Hello,
I am just painting my last group of the Prussian Landwehr of Strelets.
By the end of the year I would like to have a whole battalion ready.
I think the Corona calm will give me the time to do so.

Let us use this time... :stuck_out_tongue_winking_eye:

I am taking a stab at Italari's Indian Warriors set to add to my French and Indian War collection. Really nice figures and I am enjoying painting them much more than I anticipated.

Catching up on a backlog from a lack of mojo over the last year probably , on my table started are Strelets FFL patrol, WW2 FFL , Hat Austrians, PSC Bren gun carriers, and loads of Germania ZW stuff, but this week finished FFL artillery, Boer war Brits, US heavy weapons and cannone da 105/28, and intend continuing to play catch up while I am properly in the mood.

I've put my WoSS project on hold pending the arrival (at a lively canter) of the various Strelets cavalry sets that we have had sight of in the last few weeks.

So...it's nothing Strelets at present I'm afraid. Since the summer I have been amassing figures for a Thirty Years War project, and I have taken the decision not to start painting any of these until all are ready for painting...which sounds a bit like a strange statement, but underlies the fact that some 75% of the figures (Revell, ACTA, Zvezda and a few Mars) are converted to a greater or lesser extent. This might be a head-swap or something more complicated. The collection runs to 600 infantry and 200+ cavalry plus numerous guns and crews: it may also feature a full scale 17th century baggage park as well. The forces are Swedish/Protestant and Imperial for the early 1630s. So the converting/preparing/priming process is all taking some time.

And in between UK lockdowns I have also had surgery on both eyes, which has slowed the process a bit!

Results will hopefully start to be posed on Bennos towards the end of this year/early 2021....

By which time of course Strelets may have their WoSS cavalry sets out. Happy days!

Long term 1066, I've completed Strelets big boxes and just finished Tumbling Dice Vikings plus the usual suspects so for this lockdown its TD Anglo Saxons.
As I write its Italeri Gladiators as a companion set to Orion Gladiators. Once finished, this week I'll be onto the Arena. With all the acts including animals, chariots, martyrs and fighters I'll be able to supply a main feature and full supporting programme. I could do with an audience (any suggestions).
So many soldiers, so little time..
Paul

Trying to get a range of Commonwealth carriers - attempting on and off (struggling!) to convert a PSC universal carrier to a Windsor carrier. Need to finish off painting my strelet heavy WW1 howitzer.

World at War A9 and A9CS have just been completed so could really do with some BEF figures or early WW2 Italian campaign figures would be welcomed from Strelet to go with them!

I love how different everyone's projects are. and detailed, and esoteric!