No, a rant Mr Buckingham said.

But you knew that.

Thank you very much everyone for your opinions. It is good to have different points of view of people with something in common "we love this hobby.
I personally in the infantry (from the musket era) I like moving forward with the bayonet openwork prepared for the fight and then firing, marching I like it less although I recognize that for the time it is practically obligatory. Knee soldiers do not like anything.
In cavalry I like to load with outstretched arms.
I agree that a set should be a set and in my modest opinion it should cover the following:
(it was musket)
Fire line
Moving forward - attacking
marching
Controls (Officers, flags and musicians)
As an example one of my favorite sets. Zvezda Swedes in the Great Northern War (irrelevant grenadiers).

Have a nice day

In Napoleonics my favourite infantry pose is advancing with charged bayonet; I also like standing firing and loading, in equal numbers for a decent firing line. The most important thing with Napoleonics is to have groups of figures doing the same thing at the same time. I'm not so keen on marching figures but I understand that the gamers who want them are a big market and manufacturers will want to cater to them. I can use the marching figures to fill in rear ranks but I prefer action figs. That's why separate action and marching sets are great, we can all get what we want. I don't really get standing sets. If the sculpting's really good and the command figures are really nice I might buy a box but standing figures don't really grab me.

For Napoleonic cavalry I like figures to be galloping around like maniacs waving their swords in the air, that's what cavalry's for. Even better is figures giving point, those poses in the Italeri Life Guards and Guard Chasseurs a Cheval are the best cavalry figures ever. Again, I understand that the gamers want a lot of the "Ain't I Pretty" pose and, again, they are handy for rear ranks.

For things like Celts I want lots of figures charging and lots of different poses to emphasise the wild disorganised look. Same goes for Jacobites to an extent, lots of charging figures required. But I do like the way that the Strelets sets had a mix of figures with swords, firearms and Lochaber axes. Realistically there's probably too many swords and not enough dirks and axes but I like to see highlanders with broadsword and target and I suspect that's the way most folks like to see them so great job Strelets!

This is the Strelets site so I have to mention my favourite Strelets poses, it's these ones: 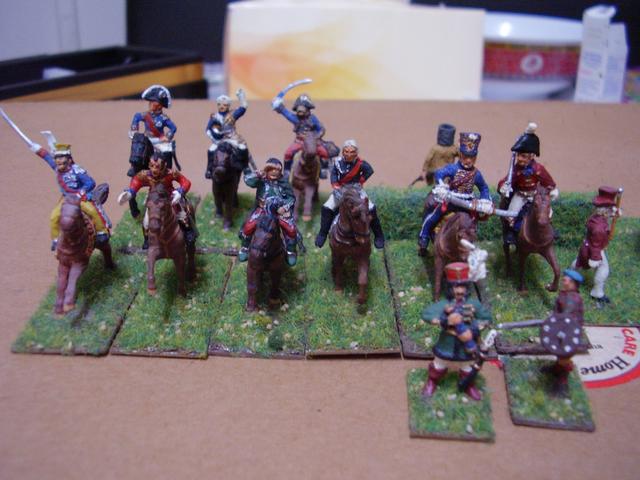 Strelets make great personality figures. I have modified some to get just the figure I want but to do that you need good figures in the first place.

Advancing-attacking
shooting up
marching (gun to shoulder)
other

And in the horses
stopped
jogging
galloping-charging

Firing and loading I find useful in limited numbers for skirmishing. Otherwise the're a pain if you want troops in column.

Any infantry pose that does not work in a rear rank is a difficulty. Marching is best, but I'll take standing.

Standing is, I suggest, what cavalry spend a lot of time doing on the battlefield. Walk or trot is fine. Galloping poses are not much use, I find, though you don't always get a choice.