Bingo! What a great picture. It portrays all the nice details we'd love to have for FFL last stands (as you say!). In fact back on February 12, 2019 this year Strelets posted a "Teaser Picture" of a cannon and crew for us FFL fans. I almost forgot. Maybe we'll be able to add it to our armies by the Year End Holidays. Here is the link:


Note to Strelets:
Please also make a beautiful set with the same kinds of poses of British Infantry for the Boer War to use "Patrolling" the South African countryside for Commandos!
Thank you.

GC, Many thanks for remembering and sharing that link - I suppose, and hope, that the FFL arty set will be in the Dec 2019 batch of new releases then! Great!!! :grinning:

Email
i
ironsides
84.139.163.86
Re: French Foreign Legion Mounted Companies
Baratheon
Yes, and I think we need some artillery too in order to fully recreate some fierce last-stand battles...including wounded and casualty figures... 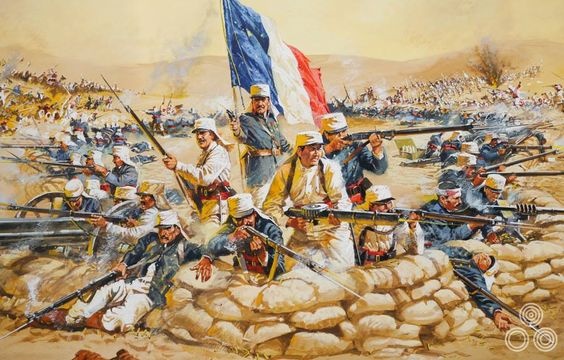 The image is the cover art for one of the DVD versions of "March or Die" with Gene Hackman and Terence Hill, and reflects more the last stand events of the movie rather then any historical event.

For artillery a simple mountain gun like that included in this strelets set from the RTW would work:

it may even be possible to use some of the gunners or convert them to north african gunners(hooded coat)...
You should note that when older accounts refer the use of a "Hotchkiss Gun" its most likely refering to a small gun of this kind or a gatling type ship gun not the famous french MG.

summer 1918 somewhere in N-Africa:
"Pochelu resumed his advance with the legion company(mule company) once more behind the center in reserve.
At perhaps 2.30pm the column came under heavy attack and there was "violent fighting before the units could deploy" and the machine begin to function.
On the right the Senegalese fell back, the legion company moved forward and charged to fill the gap in the fighting front, but tribesmen infiltrated bettween the platoons of Senegalese......."

At first it sounds line any desert battle untill you realise its being fought in dense undergrowth in an extensive North African Oasis!

Source: Our Friends Beneath the Sands, Martin Widrow, Recommended :wink:
« back
Return to Website  > Index