We are running out of superlatives for these beautiful masters! Don’t let that disuade you from producing them!😂
Thanks for continuing to make Napoleonic dreams come true in 2019
James

Wow more Napoleonic sets I am an ardent nappy fan but I am starting to lose track of all the new nappy sets being released in the next year.
I am also am feeling a little bit guilty that other subjects are not really getting a look in at the moment OK well not that guilty any chance of some nappy artillery in the near future Strelets please.

There you go again - at the rate great sets are coming out I have to hang around at least another twenty years to get everything painted! Life is sooooooo hard... :wink:

I hope to see soon marching and fighting/advancing sets... the standing at ease or at attention sets don't have my preference or priority. However great masters.

Good to see any additions to available figures, however I would prefer to see the gaps in the hobby closed rather than repeating types of troops that have already been covered by others, no matter how badly. But to emphasise, glad to see more variety on the way.

They really look good. Almost want to get some of these as a painting project

I think maybe the left hand figure could be polish I hope so still waiting for the polish artillery set to come along.

Definitely not polish or saxons but looks like pre baradin 1812 uniforms.if i remember corectly only one division who went to russia in 1812 had new 1812 baradin uniforms.rest had early pre1812 uniforms looks like soldiers for borodino it was fought on 7 september 1812 so it wasn’t cold that day.elites hoply strelets will make fusiliers too.greetings.

These have to be Set 197 French Infantry in Summer Dress Standing at Ease as advertised on the sides of the recent batch of boxes, only there is a problem these have two cross belts which would mark them as Elites such as Grenadiers or Light Infantry except they have no epaulettes or plumes, if they had just one cross belt they would be Fusiliers, so I think Strelets may have made an error in their research hopefully it's not to late to change things.


Having said that the quality of sculpting is once again excellent.

Well I can see one sabre-briquet and possibly an epaulet and the other figure has shako cords so they must be elite company men... problem solved

Brian
86.184.248.28
Re: Friday Model
Phil Ball
Well I can see one sabre-briquet and possibly an epaulet and the other figure has shako cords so they must be elite company men... problem solved
I have to concede these must be Elites with no plumes in campaign trousers, which leads me to ask will there be any Fusiliers the most common form of French infantryman and much more in demand than the Elites which have been done many times before, I would not mind if the boxes contained both but would expect there to be two Fusiliers to every one Elite figure.
p
Pavol
69.142.83.157
Re: Friday Model PLEASE STRELETS CAN YOU ADD MISSING EPAULETS?

Ow yes they are missing epaulets.Please strelets add epaulets.can you make it correct or is it too late?

And please, if they are supposed to be french. The pompon was never covered, always visible.

Brian
86.184.248.28
Re: Friday Model PLEASE STRELETS CAN YOU ADD MISSING EPAULETS?
Mr Schmitt
And please, if they are supposed to be french. The pompon was never covered, always visible.
Yes Mr Schmitt is correct the covered shako should look like this 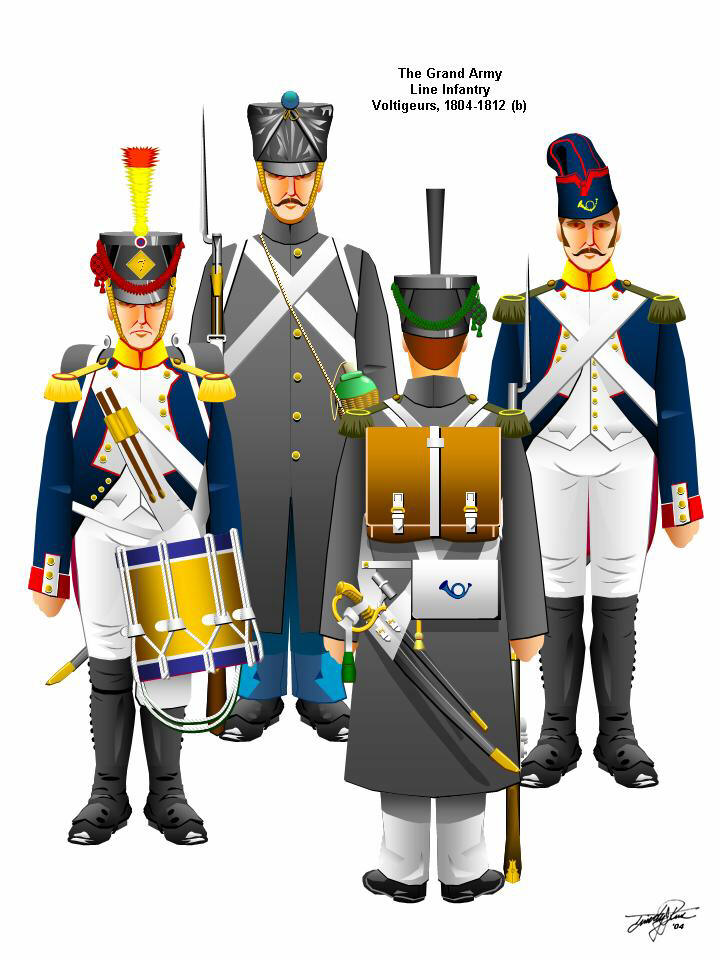 At first glance, I thought that the right-hand figure looked Russian, but it did not look quite right. Checking Viskovatov's "Historical Description of the Clothing and Arms of the Russian Army" (translated) suggests that a covered kiver (shako) did not come into use until 1817.

I suspect that Steve H (above) is correct and it is a czapka. It's always difficult to tell from a single image.

Could be that some patience and trust in Strelets is in order?:slightly_smiling_face:

Sorry to disappoint you but polish had different uniforms dinstictive kurtka not like french and czapka if will be present on those figures then its incorrect uniform.early some polish troops used cpitured austrian and prussian uniforms and they adjusted them to distinguish themself from others.as time passed (wore out uniforms)they changed them for new ones which in 1810-14 had different lapels compared to french jacket.

True and good point, I was not focussing on the waist-coat, silly me.

I'll be interested to know what he is then. Perhaps the camera angle makes the shako look like a Russian kiver?

Please put us out of our misery and give up the country and unit type. I cant take it anymore lol


On a separate issue is your new venture the production of buildings / terrain?

It’s ok nobody can be focused 100% all the time.it happens to me too.yes It must be camera angle because when you look at figure stand you can see bottom of the stand.so shako looks different.but still missing pompon first figure,both figures missing epaulettes should be corrected unless they’re some napoleonic hippies :-D then excuse my french.Would be nice to have separate elites and fusiliers in separate boxes so we can buy both based on needs.

Set M011 (Russian Grenadiers in winter dress) being not available anymore for long I will be very glad to buy new sets of russian line infantry (musketier) in summer or winter dress, no matter the pose (standing, firing, at ease and so on), we need good and accurate 1812 russian fusiliers.

I recentlly bought the latest strelets sets (WWII, ACW and Napoleonic) and I'm very happy with them. keep the good work coming to us !