Nice looking figures with some great poses.
Looking forward to geeting my hands on these
Bring on the Vichy French !

They do indeed look good, but just a point about the pith helmet; is it supposed to be a Wolseley type helmet? If so, it should be flat across the back, like this: 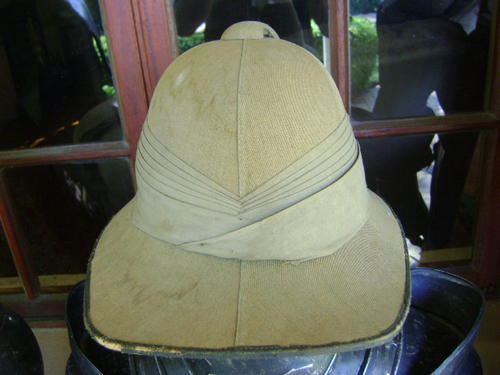 This was a design feature to protect the neck from sunburn when lying prone, and is a distinctive feature of British pith helmets from around 1900 to 1945.

Given the sun helmets seem to be of a different design to the British one, and to my untrained eye very much looking like everybbody else's sun helmets, wouldn't that make this set a good source for Italian / German / French / Dutch... sun helmets? Regards, Pa

Great to see another set in the new sculpting standard!


"One of South Africa's (S.A.)main efforts during the early part of World War II was in Italian East Africa(ie - Abyssinia). This was during 1939 -1940. I hope Strelets is producing these figures as to date nobody has produced them yet. The SHQ figures in metal are wearing the correct sun helmets(the South African "Polo Pattern"-totally different to the British sun helmet") but are depicted in shorts for the desert campaign. In the East African campaign they had a distinct South African "look"about them as they wore the S.A. bush jacket, long trousers, World War I webbing and the distinct S.A. gaiters which where higher than the British army gaiters. They also wore brown boots not the black boots used by the British and other commonwealth countries. Weaponary carried was British Lee Enfield .303(not the number 1 mk 4 - but the earlier weapon), Bren guns, 1907 pattern sword bayonets and the support companies had Vickers medium machine guns and 3" mortars. The infantry had 2" infantry mortars.

In the later part of World War II, after the North African campaign was concluded the 6th South African Armoured Division was deployed to Italy around mid 1944 until the end of the war. They wore mainly British style battle dress made in South Africa so ordinary British infantry can be used for them.The only distinctive South African item was the brown boots as opposed to the black boots used by the British and other commonwelth divisions in Italy."

Very nice sculpts. Good poses and lots of personality. Lucky for us
Strelets is a Russian company - if white South African troops were produced
in the USA, someone would be claiming racism and organizing a boycott.

I'd rebuke you for saying that Britfan if it were not tragically true!

If they aren't Thompsons, then what are they supposed to be. While they could have the magazine on the side, they don't match the barrel of a Sten and Stens, in this time frame (Madagascar) don't have pistol grips or butt stocks like this. I don't believe that Stens were available for the East African campaign.

The pith helmets do appear to be the South African version. The SA version was like the Dutch version and not the British Wolesley

These masters look great! I do hope that final product will be as good as these masters.The additional figure Strelets in helmet is also very promising (early American Soldiers set also have vesry intersting Strelets figure).I do hope this will start new range of Strelets XVI-XVII in helmets...

Could it be something like this? Although the S.A. version doesn't appear to have gone into production.

Nice sculptured! Hope serial product will keep on. Also hope they do them in tan plastic colour...

Dear Strelets,
these are looking good. Thanks for continuing to make great figures.

All the best, steve

While I don't "do" British or Empire figures as such, these look very nice and I might be persuaded to buy a couple boxes. They might be good from some African safari, bush wars, lost world scenarios, I think.

They seem nice ...and very useful to be fielded VS Italians in East Africa..in their sector they fought alongside interesting units like K.A.R. and Ethiopians Patriots plus Sudanese ..the uniform is typical of that front..eventually i saw some picts with men wearing bush hats and, in few cases, shorts..above all among gun crews and second line troops..
the only thing tht puzzle me is the dimension of their rifles..it seem quite short and fragile

p
Pa
84.61.35.19
Re: Union of SA troops
ITALWARS
the only thing tht puzzle me is the dimension of their rifles..it seem quite short and fragile

That is my impression also, albeit I claim no expertise.

Italwars, would you happen to know there to buy Italwars figures? Regards, Pa
« back
Return to Website  > Index