You can find the drawings on the strelets homepage ,hope you like

Thanks for the alert, Flopper. Are you the 3D artist?

I want this kit to be a success like the first 4 guns in the Arms range, so I've been trying to appraise this 3D model for accuracy so that Strelets don't put into production a model with some terrible faults (like Airfix did with their "Mark I" tank).

Looks good to me, but it's not possible to estimate the length. I have some doubts about the rear axle/wheels being wider than the front one. And the side of the bonnet/hood looks exaggerated to me, compare these: 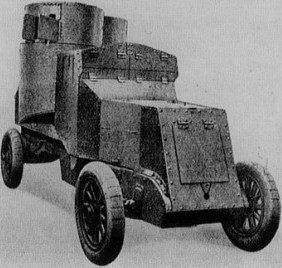 The protective plates beside the MGs, and the vision flaps look too fat, but I think that is just an illusion of the 3D rendering process (or maybe a limitation of the thickness of the walls in a model).

Two of the pics don't seem to match up to each other. The turrets were offset, so this one looks right: but if that's correct then you shouldn't be able to see through from side to side, like this: So I hope it's more like the plan rather than the side elevations. And compare with this: 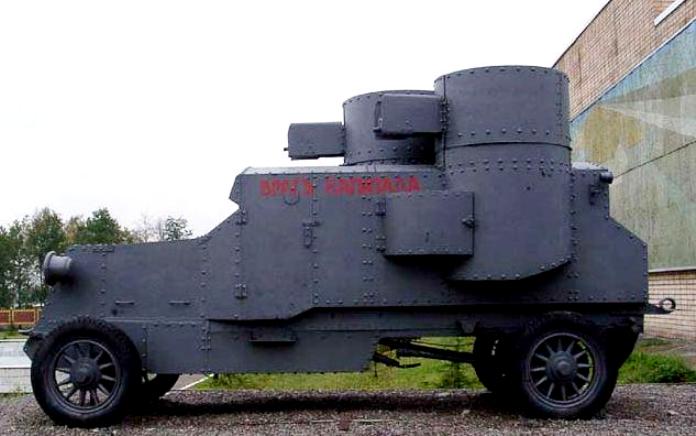 Let's see what everybody else says, but personally, I'm quite excited by this work so far. There is an article on Landships here:

Very exciting news indeed! However a close look at period photos seems to show PDA's concern is not unjustified. Some more research is needed.

The computer rendered side view when compared to the photo of the actual beast underneath looks dimensionally (lxbxh) different. The body is too high on the chassis if you look at the line of the tops of the wheels. I don't know how close you have to look to spot this or count the wheel spokes. The front and rear axle & wheel widths are the same on the Austin according to plans( eg Zaloga's). The patterns on the rear leaf springs (semi elliptic I think on these Austins) are not correct and the armour is far too thick- vision port, maxim armour etc.

Are they supposed to be the same vehicle?

There were lots of variants of these Austin Putilov armoured cars and lots of chassis too -White, Fiat, etc. Maybe this one is off the beaten track.

PDA
99.239.18.40
Re: drawings of strelets armoured car of austin putilov
David O'Brien
...There were lots of variants of these Austin Putilov armoured cars and lots of chassis too -White, Fiat, etc. Maybe this one is off the beaten track.
David
No, there was only one type of Austin Putilov. Some may have been rebuilt, and in doing so some changes may have been introduced. But these were Austin armoured cars supplied by England to Tsarist Russia. The Russians found the armour to be rubbish, so it was removed and new armour was put on at the Putilov Works. They took the opportunity to include some design changes, such as the diagonally offset turrets. I think there was also a batch of just bare Austin chassis sent over as well. Either way, they were armoured by Putilov, hence, "Austin Putilov". (Although, at the time they were just called "Ostins")

Except for the three in Vladivostok (armoured by Dalzavod), the Fiats were armoured at the Isorski Works, as were 11 Renault, and 1 each of White, Russo-Baltique, Benz, Pierce-Arrow, and Isotta-Fraschini. Which makes them Isorski-Fiat etc. Or, more commonly they are named after the Russian hero who designed the sloped armour: Renault-Mgebrov, White-Mgebrov etc.

I noticed that the sketches look too short and too tall. I thought that was a deliberate distortion of the sketches so as not to give any commercial advantage to a competitor. I hope it was deliberate!
d
David O'Brien
94.169.228.194
Re: drawings of strelets armoured car of austin putilov

Not sure of your point. Design changes, mods or variants take your pick eg angled roofs, curved roofs as in this one. Yes I know all that you mention as I have the gen in Zaloga and Grandsen. "as in the case of the Austin there were several body variants which differed in minor details" op cit I have basically taken that not made it up save your No for them.

Several chassis looked similar eg Putilov Packard or the Izhorskiy White( yes not made by Putilov I assumed you knew this ditto Fiat).
The White was a touring car so had a shorter length (like the Strelets drawings) but looked superficially like the Putilov Austin

My point, which I should have made clearer, was there were lots of similar looking vehicles and this Strelets one could either be one of them by design or accident.It could also be to make possible the half track variant, mod, design change, type that compromises were made in the model to get the most from the tooling (as with the guns).

Not sure of your last paragraph. They are not distorted but the wrong proportions or wrong data- eg spokes or leaf, springs, wheels. Issuing wrong or erroneous or slightly distorted drawings would seem a strange policy. There are plenty of accurate drawings and 3d models of these vehicles already in existence. I would presume a competing manufacturer would use those or measure up the real thing. I think the only people fooled would be those who do not have scale plans - I have some.

Yes, there were "several" Austin that Russia used (in WW1, the RCW, and the Russo-polish War) five to be precise: Series 1, Series 2, Series 3, Austin-Putilov, and Austin-Putilov-Kegresse. It makes it clearer when you say some people think that many Russian armoured cars look similar (I don't think so, but I can see how some people might get them mixed up).

My last paragraph was really about a point I mentioned in my first post and one which you also mentioned - that the body seems too high. It seems to my eyes that in the side views the vehicle is too short and too tall, and the side views do not match up to the plan view (in the plan view, you could not draw a straight line from side to side between the turrets, but in the side view you can see straight through). It just looks as if the pic has been squashed from side to side, whereas the plan view hasn't. That's in addition to the other detail errors.

Considering Strelets' WW1 guns are accurate but simplified, I am surprised that this Austin Putilov is not the same, ie simplified but accurate. I just hope it's not too late to make a few tweaks to the 3D Computer model. I'm not interested in demonstrating any "expert" knowledge of early armoured cars, I just want a good, plastic model of the Austin Putilov. Maybe I'll super-detail it when it comes out, or add Kegresse tracks, but if it's too inaccurate (like LW's Russo-Balt for example) I won't be so keen.

PDA
99.239.18.40
Re: drawings of strelets armoured car of austin putilov
PDA
.. It seems to my eyes that in the side views the vehicle is too short and too tall...
Ha! That's what you get for drinking decaf!

I mean the distance between the front and rear wheels and the overall length of the vehicle does not look long enough, and the vehicle seems to be too tall, in the side views.

The plan view looks good (if you ignore the ridge beside the bonnet).

These plans (of the Austin Putilov fitted with Kegresse tracks) may help: 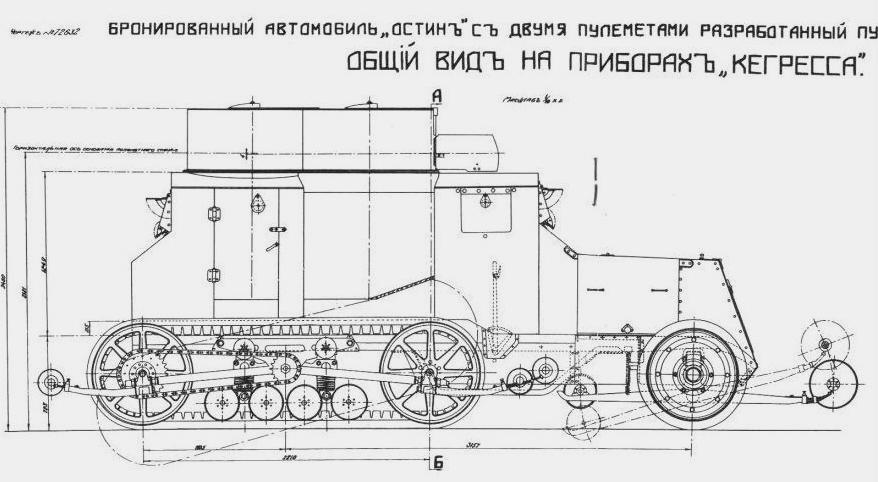 Note that in the side view you cannot see from side to side between the turrets. 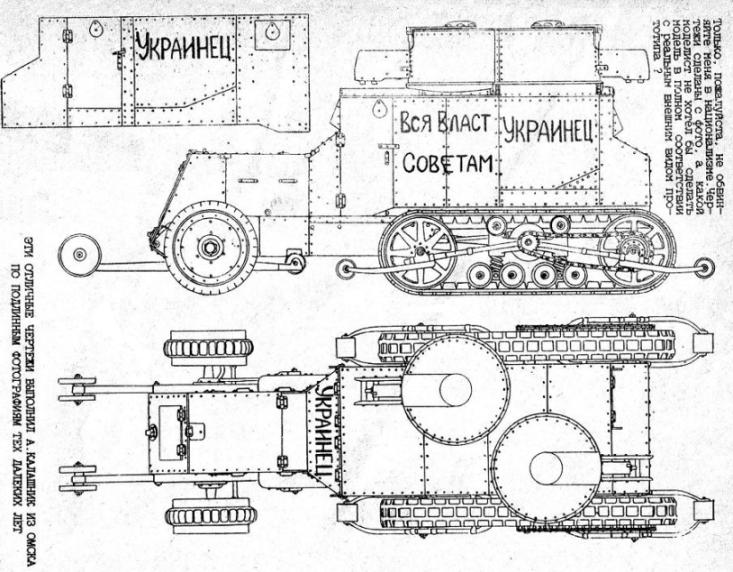 PDA
I got the Milsom Profile of Russian Armoured Cars to 1945 back in 1970 and I always fancied scratch building this vehicle though I didn't have any plans. When I did get some plans (via Zaloga and MM mags) the rivets and the wheels put me off. Scarborough's Airfix guide to Armoured Car Modelling gave my ideas a boost but still the rivets seemed like a drudge too many.

A model that is overall dimensionally correct and has good wheels and has adequate rivet detail is what I am looking for. Door handles, hinges, drive shafts etc I can make with plastic strip or rod or brass. Accurate semi elliptical leaf springs are easy to make with plastic strip. This is a fairly small model after all.
This web site of the Kubinka Museum's Putilov has a good walk round
http://svsm.org/gallery/austin/IMGP3055

The side view pic 3055 is almost a perfect side elevation

The tyres are of course not authentic

The Putilov rivets are quite close to edges of the armour plates but they may look OK when scaled down on the model.

I hope the drawings are revised.

Just had time to edit

PDA
99.239.18.40
Re: drawings of strelets armoured car of austin putilov
David O'Brien
...A model that is overall dimensionally correct and has good wheels and has adequate rivet detail is what I am looking for. ..
Me too.

David O'Brien
...I hope the drawings are revised...
Me too.

a
Alan Buckingham
81.153.81.254
Re: drawings of strelets armoured car of austin putilov

..Well I hope strelets read your posts gents and find them as riveting as I did